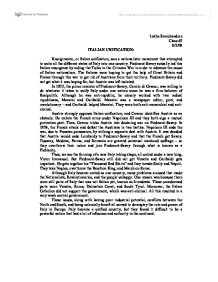 Lekha Ravichandran Class #2 9/2/09 ITALIAN UNIFICATION: Risorgimento, or Italian unification, was a nationalistic movement that attempted to unite all the different states of Italy into one country. Piedmont-Savoy actually led this Italian resurgence by aiding the Turks in the Crimean War in order to advance the cause of Italian nationalism. The Italians were hoping to get the help of Great Britain and France through this war to get rid of Austrians from their territory. Piedmont-Savoy did not get what it was hoping for, but Austria was left isolated. ...read more.

Austria strongly opposes Italian unification, and Cavour identifies Austria as an obstacle. He enlists the French army under Napoleon III and they both sign a mutual protection pact. Then, Cavour tricks Austria into declaring war on Piedmont-Savoy. In 1859, the French attack and defeat the Austrians in two battles. Napoleon III ends the war, due to Prussian persuasion, by striking a separate deal with Austria. It was decided that Austria would cede Lombardy to Piedmont-Savoy and that the French get Savoy. Tuscany, Modena, Parma, and Romania are granted universal manhood suffrage - so they overthrow their rulers and join Piedmont-Savoy through what is known as a Plebiscite. ...read more.

One reason was because there were still parts of Italy that was not Italian yet, known as Irrendenta. These unredeemed parts were Venetia, Rome, Dalmatian Coast, and South Tyrol. Moreover, the Italian Catholics did not support the government, which was anti-clerical. All this resulted in a very weak central government. These issues, along with having poor industrial potential, conflicts between the North and South, and being colonially bereft all served to downplay the role and power of Italy in Europe. Italy became a unified country, but they found it difficult to be a powerful nation that had a lot of influence and authority in the continent. ...read more.