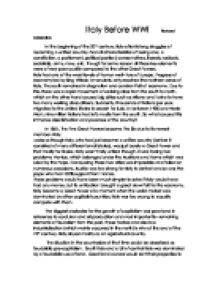 Italy before WWI - poverty and migration.

Italy Before WWI Richard M�ekallas In the beginning of the 20th century, Italy after its long struggles of becoming a unified country, had all characteristics of being one; a constitution, a parliament, political parties ( conservatives, liberals, radicals, socialists), army, navy, etc. Though for some reason all these key elements were of very poor quality compared to the other Great Powers. Italy had one of the worst levels of human well- fare of Europe. Progress of economy led by king Vittorio Emanule III, only reached the northern areas of Italy. The south remained in stagnation and constant fall of economy. Due to this, there was a rapid movement of working class from the south to north, which on the other hand caused big cities such as Milano and Torino to have too many working class citizens. Suddenly, thousands of Italians per year, migrated to the United States to search for luck. In between 1900 and World War I, nine million Italians had left, mostly from the south. So what caused this immense dissatisfaction and poorness of the country? In 1861, The Five Great Powers became The Six due to its newest member- Italy. Looks as though Italy, who had just become a unified country (before it consisted of many different small states), was just barely a Great Power and that mostly for its size. ...read more.

He had the right to appoint ministers or any other position to anyone he wished. He also had absolute right to the army. Constitutional and law forming rights belonged to two main sectors: the senate and the ambassadors. The senate consisted of princes and people appointed by the king from higher clerks, bishops and the richest of land owners and citizens. The ambassadors were mainly chosen by reputation of voting. The right to vote (only for men) started at the age of 25 and was only possible if that man paid 40 lyres of tax per year or a certain amount of rent. Out of 27 million people, only about 600 000 people had the right to vote at the end of the 19th century. France was defeated in a war with Germany and thus became week, so in 1870, Italy got a hold of Rome. Pope Pius IX was removed as the leader and Rome was made the capital of Italy. In attempt to fix relationships with the Pope, a law was declared that the Pope would still continue to have complete sovereignty, but only in Vatican and would continue to lead the Catholic Church. He was also allowed to accept diplomatic visitors and to appoint representative diplomats abroad. The Pope on the other hand was very active in going against this overthrowing. ...read more.

In 1887 he declared a law which punished by jail, anyone who would speak against the government. But Crispi didn't only act against the clergy. Actually, his more stronger, aggressive and brutal focus was on the dissatisfied, raging masses of working- class people, farmers and socialists. He completely succeded to suppress the violent movements of the farmers and working- class people. But the situation in Sicily was still terribly poor due to the treatment given to private farmers by government officials. These officials would simply ravage the farmers' homes and steal their money. This caused a major violent revolt against the government officials especially. This spread throughout Sicily and mainly consisted of armed farmers driving officials out and burning tax- logs. Crispi's reaction was violent. He sent a whole army which burned down villages , killed anyone with a gun and ruined crops to starve the farmers. The Sicilian upbringing was stopped in blood. In 1898 another upbringing came to event. This time by anarchists going against Crispi's violent behaviour of power. This strengthened anarchist movements and organisations and in 1900 King Umberto I was murdered. The new king was to be the popular Vittorio Emanuele III. It would be only in Vittorio's time, that Italy would see some kind of progress. This was because after Umberto's focus on military elements of the country, Vittorio was more focused on the people. He made many democratic changes and also improved the conditions of the working- class and farmers. 1912 marks the great day when the right to vote was given to everybody. ...read more.