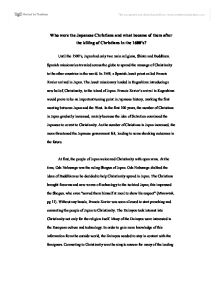 Who were the Japanese Christians and what became of them after the killing of Christians in the 1600's? Until the 1500's, Japan had only two main religions, Shinto and Buddhism. Spanish missionaries traveled across the globe to spread the message of Christianity to the other countries in the world. In 1549, a Spanish Jesuit priest called Francis Xavier arrived in Japan. The Jesuit missionary landed in Kagoshima introducing a new belief, Christianity, to the island of Japan. Francis Xavier's arrival in Kagoshima would prove to be an important turning point in Japanese history, marking the first meeting between Japan and the West. In the first 100 years, the number of Christians in Japan gradually increased, mainly because the idea of Salvation convinced the Japanese to covert to Christianity. As the number of Christians in Japan increased, the more threatened the Japanese government felt, leading to some shocking outcomes in the future. At first, the people of Japan welcomed Christianity with open arms. At the time, Oda Nobunaga was the ruling Shogun of Japan. Oda Nobunaga disliked the ideas of Buddhism so he decided to help Christianity spread in Japan. The Christians brought firearms and new waves of technology to the isolated Japan; this impressed the Shogun, who even "served them himself at meal to show his respect" (Miocevich, pg 11). ...read more.

The mass killings of the Christians in Shimabara lead the Shogun to believe that Christianity had truly disappeared from the sacred lands of Japan. For two centuries, the Japanese Government thought that they had totally abolished Christianity from Japan. What they didn't know was that many of the Japanese Christians went underground to hide their faith; these people who hid their belief were called "Kakure Kirishtan" or "Hidden Christians" in English. On the outside, these Kakure Kirishtans looked like any ordinary Japanese civilian. They dressed the same, ate the same, and even followed Buddhism and Shinto, just like any other Japanese person. These Japanese Christians had to live like every other Japanese person simply so that they would not get killed. In the bottom of their hearts, these Kakure Kirishtans stayed true to Christianity but they never let it show in public. In order to keep their lives out of danger, many Kakure Kirishtans fled the big towns such as Nagasaki and Edo and ran off to the unpopulated towns to stay out of reach from the government officials. Because the Kakure Kirishtans were so secretive in what they did, each family followed their own type of Christianity. Some people even started to mix Buddhist and Shinto beliefs into Christianity. Tomeichi Oka, a Kakure pastor, told The New York Times in 1997, "I have a Buddhist altar and Shinto shrine in my house... ...read more.

Written by Miyazaki Kentaro, a senior researcher at Tsukuba-Dai, the article has a fair reflection on the events of what happened in Nagasaki back in the 16th century. He writes in a style so that he states a lot of facts, which is easy for a student to understand. This article is not biased toward any side in particular because Brian Burke-Gaffney, an American professor at the Nagasaki Institute of Applied Science, edited it. Because Brian Burke-Gaffney is not Japanese, he can give the reader a sense of looking at Nagasaki from an outside view, which will be useful because no biased information will be included. Hidden Christians in Contemporary Nagasaki was written in 2003, which means that a long period of time had passed after the killings of the Japanese Christians. This makes the source even more reliable because more information about the events was exposed and all the strong feelings of hatred of any sort against the Japanese Bakufu at the time are non-existent. Compared to the book Christian Converts and Social Protest in Meiji Japan, Hidden Christians in Contemporary Nagasaki is more of a factual account unlike the other book, which tells more of a story of the Meiji Era. The audience for Hidden Christians in Contemporary Nagasaki is intended for high school and university students so it was easy to take a detailed look at the events of Japanese Christians in Nagasaki before the Meiji Era. ...read more.