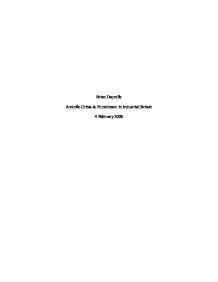 Brian Daurelle Juvenile Crime & Punishment in Industrial Britain 4 February 2008 The upswing in juvenile crime was caused by the poverty in dense city areas. In places with high concentrations of people, there tends to be a sharp distinction between the wealthy few and the poor masses. Thus, juvenile delinquency found a strong niche in industrial Britain. Along with it, there came a deeper investigation into the causes of crime, bringing the upper and lower classes towards a better understanding of the others' ways of living. As a result, punishment was rethought on a more rational basis, giving a say to those who turned to crime out of necessity. The upper class was presented with new evidence from those who interacted with criminals, people like Mr. W. A. Miles, who, from his close contact with young thieves, presents a sympathetic view of their plight. He argues that criminals are not born innately wrong, but learn quickly that stealing is the only way to survive. ...read more.

Consider also the views of the Reverend Sydney Turner, the dean of a Reformatory School who naturally came into contact with only the most criminal of children. He insinuates in a letter to Parliament that crime is natural to his charges, but that it can be successfully suppressed. Such investigations into the motives behind crime caused the judicial system to be almost completely rethought for minors. The group of 'underage criminals' was further subdivided; in the first division are those young enough that they do not understand the implications of their crime. For example, one Mr. Hoare bore testimony that a seven year old girl was sufficiently incapable of comprehending the ramifications of her crime that her sentence should be light. He gives no opinion of the case directly, but from his lack of protest to an easier sentence, it is apparent that he supports dealing out punishment in proportion to the indented malice in the crime. ...read more.

Instead, they were poor-houses of sorts, a place where children in a situation that would incline them to turn to crime could go to be cared for and to be taught a skill. Just thirty years after Carpenter's work, Gertrude Tuckwell published "The State and Its Children", explaining how the success of the schools has developed into a reward system, in which children can earn money by good behaviour, for when they are released. She speaks disdainfully of the continued practise of whipping delinquents, but states that the effectiveness of the reform system is such that 'corporeal punishment' is almost obsolete. Criminal justice in Britain took a turn for the better in the mid-19th century as a result of the distinction between adult and juvenile offenders. Replacing the previous view that immorality and inclination to illegal action was a natural trait, was the idea that crime was a result of a child's situation, and that any person would do the same in that situation because it was necessary to survive. ...read more.