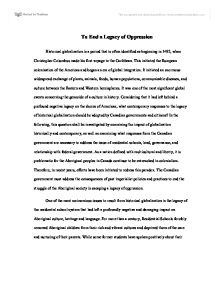 To End a Legacy of Oppression Historical globalization is a period that is often identified as beginning in 1492, when Christopher Columbus made his first voyage to the Caribbean. This initiated the European colonization of the Americas and began an era of global integration. It initiated an enormous widespread exchange of plants, animals, foods, human populations, communicable diseases, and culture between the Eastern and Western hemispheres. It was one of the most significant global events concerning the genocide of a culture in history. Considering that it had left behind a profound negative legacy on the shores of Americas, what contemporary responses to the legacy of historical globalization should be adopted by Canadian governments and citizens? In the following, this question shall be investigated by examining the impact of globalization historically and contemporary, as well as examining what responses from the Canadian government are necessary to address the issue of residential schools, land, governance, and relationship with federal government. As a nation defined with multicultural and liberty, it is problematic for the Aboriginal peoples in Canada continue to be entrenched in colonialism. Therefore, in recent years, efforts have been initiated to redress this paradox. ...read more.

The announcing of the Specific Claims Action Plan by the Harper government effectively addresses the huge backlog of unresolved treaty claims that has been the source of division and conflict in communities across the country. Ever since 1973 when the government announced its first claims policy, only 16 comprehensive claims had been settled over the years and with remaining 71 land claims negotiations still to come. The new federal plan shall address this issue by creating a new tribunal comprises of judges who would make final decisions on claims when negotiations fail, and speeding up processing of small claims and improve flexibility in the handling of large claims. The policy provides an avenue to resolve the historic grievances without delay so that no other communities shall ever experience 31 years of process to settle a land claims like the Nisga'a First Nations. If the Specific Claims Action Plan is to progress with result, in no time the First Nations society can experience the same cultural revitalization in arts, traditions, language, and identity as did the Inuit of Nunavut. No doubt, the Government of Canada should concentrate on resolving land claim disputes and end the long struggle of First Nations for self-determination. ...read more.

The persistent disregard for the Aboriginal rights and culture like building a golf course on a piece of land that was once a burial ground and deploying the military for the purpose of suppressing the voice of the First Nations people must not continue. In order for Canada to mature as a whole nation and frame a new relationship with the First Nations peoples, the federal government must insure that the rights of Aboriginals are protected by democratic institutions and that decisions are respecting the traditions, history, language, and culture of the First Nations peoples. All in all, the Canadian contemporary society should take full responsibility of the consequences of the past that are affecting Aboriginal peoples today. The centuries of assimilation of Aboriginal culture by the Europeans began a cycle of social, physical and spiritual destruction. The impacts to current day include poverty, poor health, and substance abuse. The Canadian government must respond to the Aboriginal issues by establishing basis of justice and fairness for the Aboriginal peoples, provide financial support for the construction of institutes that will reintroduce Aboriginal culture, heritage and language to the community. Canada must commit to the development and support of policies and long term programs that are needed to re-invigorate the Aboriginal language and traditions. ...read more.