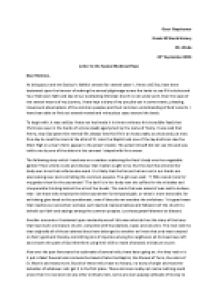 Letter to the Typical Medieval Pope

﻿Gauri Gopakumar Grade 10 World History Mr. Wade 21st September 2011 Letter to the Typical Medieval Pope Dear Holiness, As being your and the Saviour?s faithful servant for several years- I, Henry de Silva, have been bestowed upon the honour of making the annual pilgrimage across the lands to see if His duties and Your Holiness?s faith and law of our everlasting Christian church is not under peril. Over the span of the several moons of my journey, I have kept a diary of my peculiar yet in some events, pleasing, travels and observations of the common peoples and their common understanding of God?s words. I have been able to find out several mental and miraculous cases around the lands. To begin with, it was said (as I have not had made it in time to witness this incredible feat) that Christ was seen in the hands of a (now dead) aged priest by the name of Henry. It was said that Henry, may God grant him eternal life, always lived his life in an honourably as a holy and just man. ...read more.

The man told me that originally all of those talented bees have belonged to another evil man that only was tempted on fool?s gold and thereby committing sins of injustice among his neighbours all his bees have left and chosen the path of God therefore using their skill to make a fantastic miniature church. Also over the past few years the outbreaks of several relics have been going on. Are they real or is it just a fake? Several relics include the Head of John the Baptist, the Shroud of Turin, the relics of St. Martin and many more. But all of these relics have no history, no story of origin and how the beholder of whatever relic got it in the first place. These relics are really not real as nothing could prove that it is real and not any other ordinary item, some are even paying cartloads of money to get hold of one of these relics. But all of these relics fake or not, still show the utter devotion of the martyrs and the Saviour, of the common peoples. ...read more.

But are we really supposed to be killing all these people, giving them indescribable amounts of pain? Church and the papacy have the aim to be the direct connection to God and to teach the Way to those heretics and common peoples. Is it really necessary for the Church to oblige with such violent methods of spreading God?s words? In conclusion the lands are all good; Your Holiness is doing a wonderful job keeping the lands controlled and spreading the word of God. Several of the common people make more stories related to God. But I?m begging you to be more merciful to the heretics, such confused people shouldn?t be dealt with such pain but instead be merciful like our Saviour and try to show them the way instead of terrorising them to make them realise the necessities and values that we should follow, we?re all human beings in the end with families and loved ones. Other than that, everyone is devoted to Christ and His ways. Thank Your Holiness for letting me go on this devoted pilgrimage, Your forever faithful servant, Henry de Silva. ...read more.