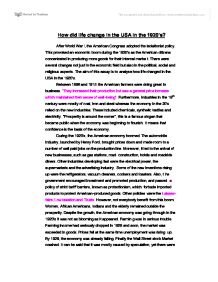 How did life change in the USA in the 1920's? After World War I, the American Congress adopted the isolationist policy. This provoked an economic boom during the 1920's as the American citizens concentrated in producing more goods for their internal market. There were several changes not just in the economic field but also in the political, social and religious aspects. The aim of this essay is to analyse how life changed in the USA in the 1920's. Between 1896 and 1915 the American farmers were doing great in business. "They increased their production but saw a general price increase which maintained their sense of well-being". Furthermore, industries in the 19th century were mostly of coal, iron and steel whereas the economy in the 20's relied on the new industries. These included chemicals, synthetic textiles and electricity. "Prosperity is around the corner", this is a famous slogan that became public when the economy was beginning to flourish. It means that confidence is the basis of the economy. During the 1920's, the American economy boomed. The automobile industry, launched by Henry Ford, brought prices down and made room to a number of well paid jobs on the production line. ...read more.

JAZZ emerged from the coloured people community. By many, it was seen as morally unacceptable because of its sexually explicit songs and dances and since it increased the smoking habit among teenagers. As we can see, in the 20's entertainment became a very notable industry. Almost everybody in the country was listening to the radio or playing sports such as baseball or boxing, two of the sports particularly new in this decade. The filming industry was also developing quite rapidly. By 1927 the first "talkie" movie was produced. And a new subject was being introduced, and enforced by this industry: "Sex". The cinema quickly discovered the selling power of sex and took advantage of it. This word, which was previously never mentioned, now blossomed. Nevertheless, the conservative society saw it as way to daring. Additionally, the Eighteenth Amendment together with the Volstead Act finally prohibited the manufacture or sale of alcoholic beverages. This was enforced from 1920 to 1933 and it aimed to reduce crime. Instead, it helped to intensify it. Consequently, an alternative industry of manufacturing and distribution of illegal drink was arising. ...read more.

This was a consequence of "The Monkey Trial", which condemned a schoolteacher for teaching the Theory of Evolution in a public school. Protestant fundamentalists predominated in rural areas, in the South and Midwest. This area was nicknamed "The Bible Belt". They were loyal followers of "Prohibition" and the Democratic Party. We have come to a point of the essay where we can certify that the 1920's was an age of contradictions. On the one hand, we have an overproduction of goods, a flourishing economy, prosperity around the corner, yet there were people without jobs, going hungry, not sharing the benefits from this boom. Then, society was tolerant with women as they could have a say, and pursue a career, but at the same time it condemned them, blaming them for corruption of family values. Not to mention that while women were able to smoke and drink in public with men, prohibition was introduced. Also, the difficult situations the people from the south had to go through, was nothing comparing to the life in the north. Finally, while there were religious revolutionists, believing in science, there were also the Protestant Fundamentalists sticking to the old believes of the Bible. Life changed in many ways during the 1920's; nonetheless it was definitely a decade of contrariety. ...read more.