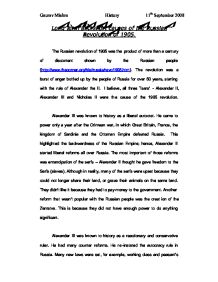 Long term and short causes of the Russian Revolution of 1905.

Long term and short causes of the Russian Revolution of 1905. The Russian revolution of 1905 was the product of more than a century of discontent shown by the Russian people (http://www.thecorner.org/hist/russia/revo1905.htm). The revolution was a burst of anger bottled up by the people of Russia for over 50 years, starting with the rule of Alexander the II. I believe, all three Tsars' - Alexander II, Alexander III and Nicholas II were the cause of the 1905 revolution. Alexander III was known to history as a liberal autocrat. He came to power only a year after the Crimean war, in which Great Britain, France, the kingdom of Sardinia and the Ottoman Empire defeated Russia. This highlighted the backwardness of the Russian Empire; hence, Alexander II started liberal reforms all over Russia. The most important of those reforms was emancipation of the serfs - Alexander II thought he gave freedom to the Serfs (slaves). ...read more.

The Tsar wanted a large-scale Russification; this caused problems because people were meant to learn Russian and a lot of the population spoke a different language. Anti-Semitism was a policy in the government. Nicholas II reign caused fast growth in the industrial section. Although this came in a price, many workers still had very bad living conditions, usually working 15 hours a day. Even though it was illegal, workers organized strikes and a little of that bottled up anger leaked into the air. The strikes main aim was to making working conditions better but in later years, their aims changed to over-throwing the government. When it think of the causes of the Russian revolution of 1905, I imagine that a room is filled with gunpowder, the gunpowder is a metaphor for the three czar's and the match that blew the whole thing up is the short causes like the Russo-Japanese war and Bloody Sunday. ...read more.

The petition included political and economic demands. Political demands were the calling of an elected duma, freedom of speech and assembly, guarantee of fair trials and an amnesty for political prisoners. Economic demands were more labor legislation, the eight-hour day, a reduction in indirect taxes and the introduction of a graduated income tax. The petition also demanded to end the war immediately. (http://www.thecorner.org/hist/russia/revo1905.htm). The Czar's army open fire on the peaceful crowd. Men, women and children lay dead on the floor - about 200 of them. Many others injured. The people of Russia were not happy with Czars' way of ruling, so after January 22, 1905. The anger of the people of Russia became very visible and started becoming disloyal to the czar. Different groups tried their hardest to over throw the czar. Although the czar still stayed in power. This is because the different parties were not united. There is no central leadership and most of the army remained loyal. Gaurav Mishra History 11th September 2008 ...read more.