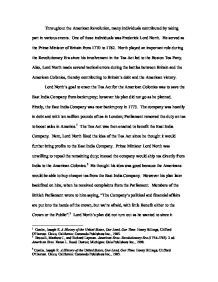 A dozen ships carrying 1,700 chests of tea sailed into American ports, the tea was then dumped into the harbor. Since North did not remove the Tea Act even though he has been getting complaints previously, protesters decided to dump all the tea came from the East India Company into the Boston Harbor. Next, Lord North decided to punish all of Boston and the colony of Massachusetts. Lord North stated: "The Americans have tarred and feathered your subjects, plundered your merchants, burnt your ships, denied all obedience to your laws and authority. Whatever may be the consequences, we must risk something; if we do not, all is over"4 North hoped that the Acts would cause American colonies to acknowledge the British Parliament over their elected assemblies. However, the harshness of this act only further weakened the relationship between Britain and the American colonies. The Continental Congress created an agreement to avoid British goods coming into America, the congress also wanted to support Massachusetts if it was attacked.5 This meant that if one colony got into an attack, all the colonies would be involved in the American Revolutionary War. ...read more.