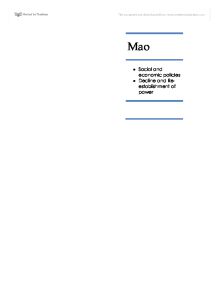 Mao * Social and economic policies * Decline and Re-establishment of power SOCIAL AND ECONOMIC POLICIES Social Reform * The CCP was keen to tackle problems of organised crime and banditry and approached this decisively, punishing and often executing major criminals but treating prostitutes and drug addicts as victims and providing them with rehabilitation programmes. * On coming to power, the CCP launched a massive drive to increase literacy and expand educational provision. * In 1949, only 24 million children attended primary education and 1.27 million were in secondary education. By 1953 this had increased to 51 million and 3.13 million respectively. * However, even by the mid-50s illiteracy rates remained very high, with perhaps as much as 80% of the population unable to read and write. * During the 1950s the CCP relied on a lot of help from the USSR in the form of Russians teaching in Chinese schools and Chinese people being trained in Russian universities. * The CCP did try to improve the position of women in society. In 1950, the Marriage Law banned arranged and child marriages and polygamy. * Women were also given the right to divorce and the right to own property. This led to a huge increase in divorce, with 1.3 million divorce petitions filled in 1953. * However, changing men's attitudes, particularly in rural areas, proved very difficult and women continued to be treated as inferiors by many men, receiving lower pay and continuing to marry outside their native villages, as was the custom. Socialist Transition First Five Year Plans (1953-57) * The First Five Year Plan ended the National Capitalist phase and saw, by February 1956, the nationalisation of all private industries and businesses in China. * Given the backing that the GMD had received from the USA, Mao decided that the PRC must 'lean to one side' in international relations and look, despite receiving very little help from Stalin in the past, to the Russian comrades for friendship. ...read more.

* The 1958 harvest was good, yielding 200 million tons of grain. However the government published the inflated figure of 260 million tons and set wildly unrealistic targets for 1959. * The 1959 and 1960 harvests were poor, yielding 170 and 144 million tons respectively. * China experienced a catastrophic famine: the death rate rose steeply in 1959 (from 1.08% to 1.46% of the population) and then hugely in 1960 to 2.54% of the population. The rate remained high in 1961 (1.7%) and in these three years, in excess of 20 million people died in the famine. Why did it fail? * CCP officials were unable to deal with the huge challenges posed by the GLF. In particular, local cadres were totally unprepared for managing the vast size of the communes. The GLF took off in 1958 with very little prior planning. * The intensive use of labour could not, contrary to Mao's philosophy, compensate for the lack of capital investment in technologically advanced processes such as steel production, hence the failure of the "backyard furnace" programme. * Flawed agricultural reforms, derived from the ideas of the Russian agronomist, Lysenko, were imposed on the peasants. These included close planting, deep ploughing and a campaign against the "Four Pests" (rats, sparrows, flies and mosquitoes). The sparrow population was all but wiped out, which allowed an explosion of caterpillars, which devastated crops. * Grain production fell partly because peasants were heavily involved in industrial projects and land reclamation. After the initial enthusiasm of 1958 wore off, many became exhausted by the demands being made of them. In the autumn of 1958, about 90 million people temporarily abandoned their normal occupations to get involved in steel production. * The withdrawal of material incentives contributed to falling levels of agricultural and industrial output. The peasants disliked the huge sixe of the communes and the regimented lifestyle and resented the loss of their private plots. ...read more.

Results * The defeat of Ling Shaoqi, Deng Xiaoping and the "revisionists", though Deng would be rehabilitated in 1973 and helped shape China's economic policies from then on. * The cult of Mao reached its height. In 1869, a new constitution defined 'Marxism-Leninism-Mao Zedong Thought' as the guiding line of the CCP. * About 500,000 people died with the main victims consisting of intellectuals and officials, not peasants as in the Great Leap Forward. The prison camp system (longai) expanded. * The period 1968-70 saw the massive transfer of 20 to 30 million urban inhabitants to the countryside. * "May 7th Schools" were set up to re-educate Party officials each year Maoist thought and by workings in the fields. * Education, particularly higher education, was disastrously disrupted for several years afterwards. During the Cultural Revolution admission to university was based on "political consciousness" rather than academic qualifications. * Chinese art and literature became very sterile as Jiang Qing imposed strict controls on what could be displayed, performed and published. The Red Guards destroyed a lot of ancient Chinese art, including Buddhist temples. * The People's Republic became increasingly isolated internationally. Westerners were attacked in China and in August 1967 the British embassy was sacked by a mob. * The economy was not severely damaged by the Cultural Revolution. There was some disruption to industry but by 1970 industrial output had risen to record levels. However much of the state's investment in 1964-71 was in the "Third Front", military-industrial development in North-West and South-West China and this was a waste of resources. * Mao saw the Cultural Revolution as over by 1970, having defeated his revisionist opponents. However, the period of Maoist indoctrination and domination, which the Cultural Revolution represents, did not end until 1976 (Mao's death). * The Cultural Revolution can be viewed as the escalation of certain features present in the People's Republic since 1949 - namely, public denunciation, struggle sessions and mass mobilisation. * It had essentially been an urban phenomenon and the countryside had suffered much less disruption than the towns. ...read more.