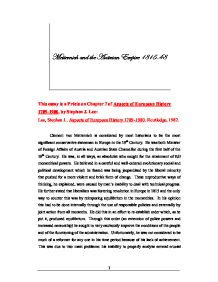 Metternich and the Austrian Empire 1815-48

Metternich and the Austrian Empire 1815-48 This essay is a Pr�cis on Chapter 7 of Aspects of European History 1789-1980, by Stephen J. Lee: Lee, Stephen J.. Aspects of European History 1789-1980. Routledge, 1982. Clement von Metternich is considered by most historians to be the most significant conservative statesman in Europe in the 19th Century. He was both Minister of Foreign Affairs of Austria and Austrian State Chancellor during the first half of the 19th Century. He was, in all ways, an absolutist who sought for the retainment of full monarchical powers. He believed in a careful and well-ordered evolutionary social and political development which he feared was being jeopardized by the liberal minority that pushed for a more violent and brisk form of change. These unproductive ways of thinking, he explained, were caused by man's inability to deal with technical progress. He further stated that liberalism was fostering revolution in Europe in 1815 and the only way to counter this was by reimposing equilibrium in the monarchies. In his opinion this had to be done internally through the use of responsible policies and externally by joint action from all monarchs. He did this in an effort to re-establish order which, as he put it, produced equilibrium. Through this order (an extension of police powers and increased censorship) he sought to very cautiously improve the conditions of the people and of the functioning of the administration. Unfortunately, he was not considered to be much of a reformer for any one in his time period because of his lack of achievement. ...read more.

Nonetheless, Metternich always considered himself to be better at the diplomatic level than at the domestic one. He tried projecting his policies to the outside world, hoping to provide a European formula for equilibrium. The way he saw it, Austria was the most moderate central European power because it stood between a more conservative Russia and a more liberal France. Overall, Metternich displayed a slight inability in adapting to change and analyzing political situations which required a certain degree of moderate reform. Clearly, Metternich was faced with serious difficulties which rendered any efforts he made towards steady progress useless. Although he had the constant support of the Emperor Francis and consequently Ferdinand I, the latter proved to be totally incompetent. The Empire was governed by the Conference of State under which most of the authority went to the chairman Archduke Ludwig and the remaining was split amongst Archduke Francis Charles, Kolowrat and Metternich. This group of three was Metternich's most difficult problem as conflict was always present and consensus was nearly impossible to achieve. Particularly damaging to consensus were Metternich's clashes with Kolowrat. Metternich disliked the fact that Kolowrat was left in charge of most of the internal matters because Kolowrat, he claimed, was devoting his limited energies to disrupting Metternich's own plans. The two major clashes between these two were Kolowrat's proposal to limit Austria's military estimates and his demands to build the Empire's first railway lines in Bohemia (his homeland). ...read more.

Metternich better at diplomatic level than at domestic level i. European formula for equilibrium ii. France - Austria - Russia III. Metternich vs. the rest of Austria a. Emperor Francis i. Conference of State, never reaches consensus 1. Chairman archduke Ludwig a. Archduke Francis Charles, Kolowrat and Metternich b. Metternich vs. Kolowrat i. Kolowrat wants to limit Austria military, Metternich wants strong military to remain strong in Europe ii. Kolowrat wants first railway lines in Bohemia, Metternich wants to connect the Austrian High Command to the vulnerable provinces of Northern Italy c. Metternich vs. Emperor i. Wants to replace traditional colleges with modern ministries ii. Sets up Kommerzdirektorium to co-ordinate economic planning iii. Submitted to several memoranda on reform concerning: 1. State Council 2. State Conference 3. New regional chancelleries. iv. All left behind by 1830 1. "This is no time for change"- Emperor Francis d. Zollverein i. Met. Tried to secure membership ii. Had to lower Empire's tariff barriers iii. Kolowrat and other archdukes quickly tell Met. economic matters are not of his concern. IV. Metternich- Conclusion a. Metternich fighting to prevent collapse of old order b. Old Europe comes to end, "New Europe has not yet even begun its existence, and between the beginning and the end there will be chaos." c. Conservatism in England i. Becomes more popular ii. Ideas of Burke re-emerge d. Metaphors i. England: (Burke) living organism ii. Austria: (Metternich) house threatening to collapse e. Metternich considers himself anachronism i. Wishes he had lived during a different era ?? ?? ?? ?? 1 ...read more.