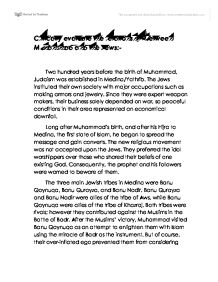 Muhammad and the Jews

Critically evaluate the relationship between Muhammad and the Jews:- Two hundred years before the birth of Muhammad, Judaism was established in Medina/Yathrib. The Jews instituted their own society with major occupations such as making armors and jewelry. Since they were expert weapon makers, their business solely depended on war, so peaceful conditions in their area represented an economical downfall. Long after Muhammad's birth, and after his Hijra to Medina, the first state of Islam, he began to spread the message and gain converts. The new religious movement was not accepted upon the Jews. They preferred the idol worshippers over those who shared their beliefs of one existing God. Consequently, the prophet and his followers were warned to beware of them. The three main Jewish tribes in Medina were Banu Qaynuqa, Banu Qurayza, and Banu Nadir. Banu Qurayza and Banu Nadir were allies of the tribe of Aws, while Banu Qaynuqa were allies of the tribe of Khazraj. Both tribes were rivals; however they contributed against the Muslims in the Battle of Badr. ...read more.

They accepted his request and invited him to eat with them. While he was there, the angel Gabriel visited him to warn him about their plotting since they were actually planning to kill him. They had broken their pact so the prophet immediately left and a while later, he sent a messenger, Muhammad ibn Maslamah, to send them an ultimatum. They were to leave Medina at once; otherwise, Muhammad will spare any mercy he has on them. They should've obeyed him, yet they didn't. Surely they believed that their Bedouin allies along with Bani Qurayza would support them, therefore, they sent to Muhammad that they shall not leave no matter what he does. That was the green light for the Muslims. The Jews have declared war. The prophet assembled an army that he led to the Jewish fortresses. It was the battle of Khaibar. Banu Qurayza had refused to break their pact with the prophet and Banu Nadir's expectations of aid from other tribes were false. They were too weak to fight the Muslims; eventually they gave up and moved out of Medina. ...read more.

Finally, God sent strong wind and rain that drove them away. In this battle, both Banu Nadir and Banu Qaynuqa betrayed Muhammad, so they both deserved what awaited them. Ultimately, the prophet requested killing 700 of the Jews and enslaving their women and children. That was their punishment for deceiving him. The Jews of Medina were given multiple chances to live in peace and harmony with the Muslims, freely practicing their beliefs and attending to their jobs, except they chose to be arrogant and rejected the terms offered to them. Thus, they were obliged to be disciplined by Muhammad. In conclusion, the relationship between the Jews and the Muslims resembled the relationship between fire and water. They could never get along unless compromises were made. In all cases, the water boiled, except in the case of Banu Qurayza were a deal was made to warm the water up without boiling it. They stayed loyal to the pact made with Muhammad. Generally, Muslims didn't go along well with the Jews and their affairs were extremely chaotic and disturbed. They rarely ever accepted Islam and until this day, their relationship is somewhat complicated. Done by: Lugein al Fayez ...read more.