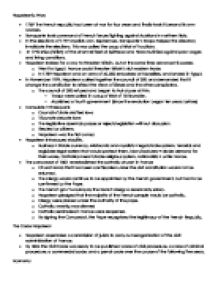 Napoleonic Wars * 1769 The French republic had been at war for four years and finally took it beyond its own borders. * Bonaparte took command of French forces fighting against Austrians in northern Italy. * In the elections of 1797 royalists won. September, Bonaparte's troops helped the directory invalidate the elections. This was called the coup d'�tat of Fructidor. * In 1793 ships (British) of the channel fleet at Spithead and Nore mutinied against poor wages and living conditions. * Napoleon looked for a way to threaten Britain, but at the same time advance his career. o Went to Egypt. France could threaten Britain's rich eastern trade. ...read more.

* The concordat of 1801 re-established the catholic church in France o Church lands that had been confiscated under the civil constitution would not be returned. o The clergy would continue to be appointed by the French government, but had to be confirmed by the Pope. o The French gov't would pay the French clergy a reasonably salary. o Napoleon pledged that the majority of the French people would be catholic. o Clergy were placed under the authority of the pope. o Catholic worship was allowed o Catholic seminaries in France were reopened. o By signing the Concordat, the Pope recognized the legitimacy of the French Republic. ...read more.

o Workers were required to carry passbooks, and were forbidden from taking legal action against their employers. o As bread prices rose, Napoleon restricted the exports of grain. o Taxation was regularized. Tax exemptions were abolished. Social Policy * Government and military careers were open to those who had talent: no social standing, political connection, or wealth a guarantee position. * Education was seen as a path to career. It was more widely accessible. * Women did not have as much rights. o Husband controlled all rights to property, including children o Even if the property was owned by the wife, she needed her husband's consent to sell it or to leverage it for a loan. o Established legality of civil marriage and divorce, a wife's ability to bring divorce proceedings against her husband was severely limited. ?? ?? ?? ?? ...read more.