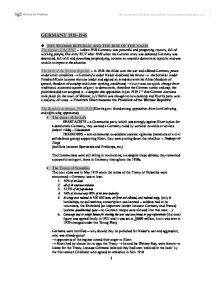 GERMANY 1918-1945 * THE WEIMAR REPUBLIC AND THE RISE OF THE NAZIS The impact of the WW1 - before 1918 Germany was powerful and prospering country, full of working people, fine army BUT after 1918 when the German army was defeated Germany was destroyed, full of ill and powerless people dying, became an unstable democratic republic and was unable to improve the situation The birth of the Weimar Republic - in 1918 the Allies won the war and offered Germany peace under strict conditions � Germany's leader Kaiser abdicated his throne � the Socialist leader Friedrich Ebert became the new leader and signed an armistice with the Allies (freedom of speech, freedom of worship and better working conditions) � but it was too quick change from traditional, autocratic system of govt. to democratic, therefore the German nation and esp. the politicians did not accepted it � despite this opposition in Jan 1919 1st free German elections took place (in the town of Weimar, b/c Berlin was thought to be unstable) and Ebert's party won a majority of votes � Friedrich Ebert became the President of the Weimar Republic The Republic in danger, 1919-1924 (Ebert's govt. faced strong opposition from both left wing and right wing opponents) * The threat of the Left SPARTACISTS - a Communist party which was strongly against Ebert's plan for a democratic Germany, they wanted a Germany ruled by workers' councils or soviets (m�stn� vl�da) - Communists FREIKORPS - anti-communist ex-soldiers became vigilantes (members of a civil self-defence group) supporting Ebert, they were putting down the rebellion - Freikorps & Nazis (conflicts between Spartacists and Freikorps, etc.) The Communists were still failing in revolutions, but despite these defeats, they remained a powerful anti-govt. force in Germany throughout the 1920s. * The Treaty of Versailles The next crisis was in May 1919 when the terms of the Treaty of Versailles were announced - Germany was to lose: 1. ...read more.

Hitler speak, they began to think only he could save Germany - Reichstag parliament - no strong opposition to the Nazis because C.P.& S.D.P. would not work together. The Socialists were still a large party, and the Communists were gaining support among the workers in the cities, but they would not co-operate. The Communists thought that a Nazi victory would cause revolution which would make the people see the Nazis for what they were and then sweep the Communists into power. Hitler takes power, 1933 - Hitler again demanded post of Chancellor - but Hindenburg did not believe him he would rule in democratic way - Kurt von Schleicher became Chancellor but lasted for very short time - Because Hindenburg and von Papen wrongly believed that they would be able to control Hitler's actions � Hitler became a Chancellor * HITLER'S GERMANY Hitler's dictatorship - when Hitler became a Chancellor in Jan 1933, he was in a very risky position, because no one knew if he was going to hold on to power for long, or even if he was going to become to supreme dictator of Germany The Reichstag Fire - just before the 1933 election, the Reichstag caught fire. A young Communist was arrested and blamed, although it is possible that the Nazis set fire in order to throw suspicion on to the Communists - Nazis still did not get majority (44%) in the elections - but Nazis expelled/eliminated the Communists and joined with the Nationalists - now Hitler had an overall majority and could be sure that Reichstag would vote for what he wanted - Enabling act (April 1933) - allowed him to make laws without reference to Reichstag for 4 years � this made him a virtual dictator for 4 years legally ! The Night of Long Knives - Hitler had made Germany into a one party state, but he soon had problems to deal with in the Nazi Party itself - The leader of SA Ernst R�hm wanted to ...read more.

and were marked with a star of David - in 1935 Jews lost German citizenship (under the Nuremberg Law) - no marriages between pure-blooded Germans and Jews Kristallnacht or 'The Night of Broken Glass' - November 1938, young Jew killed a German diplomat in Paris � violent revenge on Jews - SS troopers (in civil clothes) ran a riot and destroyed the Jewish shops and workplaces - 91 Jews were killed - Hundreds of synagogues were burned - 20 000 Jew were taken to the concentration camps - The event was presented as a spontaneous reaction of ordinary German civilians against the Jews The ghettos - places where Jews were living, separated from pure-blooded Germans - able-bodied Jews were used for slave labour - the young, the old and the sick were left to die from hunger and disease The 'death camps' - 1942 - Nazi meeting at Wannese in order to discuss the 'Final Solution' to the 'Jewish Question' - Himmler put in charge of systematic killing of Jews - Political prisoners, Jehovah's Witnesses, homosexuals, etc. were sent there - Slave labour & death camp were built at Treblinka, Chelmo, etc. - the young, the old and the sick were killed immediately, some were used for medical experiments, the rest as a slave labour Was the 'Final Solution' planned from the start ??? ? Long-term plan of Hitler vs. no clear plan, mass murder developed during the war years - not only Hitler was responsible for the genocide, but also: - The Civil Service bureaucracy that collected information about Jews - army leaders - industries such as Volksvagen b/c they had their own slave labour camps - The German people - widespread support for anti-semitism - many Germans took part in some aspects of Holocaust Resistance - many Jews fought in the resistance movements in the Nazi occupied lands - 5 concentrations camps saw armed uprisings - Some Jews were hidden by non-Jews and taken out of German territory ?? ?? ?? ?? 1 ...read more.