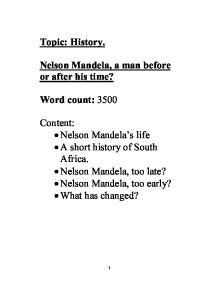 Nelson mandela, a man before his time

Topic: History. Nelson Mandela, a man before or after his time? Word count: 3500 Content: * Nelson Mandela's life * A short history of South Africa. * Nelson Mandela, too late? * Nelson Mandela, too early? * What has changed? I've always been very interested in politics, especially when it comes to Africa, and if there was one person I could meat, it would most defenetly be Nelson Mandela. I believe that this topic has been very rewarding, as I have learnt a lot of astonishing facts about a time that isn't to far away, and that still relates to modern times. In this essay I am going to acknowledge the different times at which Nelson Mandela could have been a crucial asset to the South African people. Would he have been able to change anything? And what was the political situation at that time? To do this, I gathered information using Nelson Mandela's personal statements from his autobiography and his many speeches, however this could be a biased point of view. Therefore I also used secondary sources giving different political points of view as back up for Nelson Mandela's personal criticism. It was also essential for one to understand how he perceived himself, and was perceived by others in relation to the African people. Nelson Mandela, also known as Rolihlahla (his African name), was born on the 18th of July 1918 in a small village called Mvezo in "black" Transkei. His father, the chief of Mvezo, was a member of the Tembu royal family, one of the many African tribes. His influence over his child was very limited as he died of an unknown sickness when Nelson Mandela was only 9 years old. Fortunately for the young Nelson, a rich and powerful relative took him under his wing, ensuring him a good education at various renowned schools across the country, such as (Fort Hare, Witwatersrand) ...read more.

But they had little experience in cooperation. By 1800 the Dutch colonists had developed an ideology of nation hood; they called themselves Afrikaners and they spoke Afrikaans. From their Calvinistic roots and their self-interest they considered themselves separate and superior. They regarded the black people as having been made by god to be slaves, to work under the white race. Further conflict arose with the arrival of the British in the late 1700s. The British where against slavery and set about dismantling the existing regime. The Afrikaners, now, had a new enemy. Both colonial settlers pushed farther into the Cape, dispossessing the Africans of their land. Many wars where fought, as the Afrikaners sought independence and their "god given" rule over the black man. Mean while slave traders where threatening the same black Africans from the east, and the following years where full of tribal bloodshed and infighting. The British wanted to control the whole of South Africa and they launched a military campaign against the Africans while the Afrikaners attacked the British. The British "won" but gave the Afrikaners to take black land and suppress the black people. Out of this mayhem came the in 1910, the active union pact, passed between the British and the Boer's to unite against the coloured majorities. This united the two British colonies, Cape and Natal, with The Afrikaner Republic of Transvaal and the Orange Free State. Between them they took control of the land, leaving the Africans no liberty of speech or power, and the British gained access to the large gold deposits of Transvaal, where the mining was to be financed by Britain and the dirty work to be done by cheap black labour. This was the birth of the apartheid system. The African National Congress, created to defend the rights of the African people, was born in 1912 in response to this collaboration between the British and the Boers, the ANC was too late. ...read more.

De Klerk and from then on, as elected President of the ANC was able to legitimately push the government to accept many of there terms. Today the ANC is the oldest political body on the African continent, they are currently in power in South Africa and they have much to be proud of. But their party remains fraught with infighting and criticism, several highly appointed members have recently faced criminal charges and there are conflicts over their continued alliance with communism. Latest reports on South African wealth and power show in favour of the white population. While there appears to be equality in the working and middle classes the white population still keeps the best for themselves e.g.: there are no black South African vineyard owners. But Nelson Mandela is still there and the world is sill ploughing money into the arms race. South African crime rate is one the highest world wide; this appears to be due to two factors, the very large gap between the rich and poor, and the extreme poverty of those poor. While this crime seems to be non race related, it remains a fact that in the black townships police presents and protection is at a minimum, whereas the white areas benefit from a more developed security infrastructure. So it is very possible that Nelson Mandela, had he been around during a different time, may have been able to free the African people much sooner, and avoiding to many casualties. Even though he still prevailed in the starting of the creation of a free South Africa, based upon his dream, it will take a long time before South Africa finally achieves a full recovery from the atrocities it has been through, and is considered a modern developed nation. Also I can only stipulate and suppose what might have happened at a different time in history, yet it is impossible to know for sure if it would really have made a significant difference or not. I personally believe that it would have evolved differently but for the better, as the South African struggle isn't over yet. ...read more.