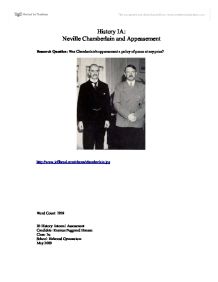 History IA: Neville Chamberlain and Appeasement Research Question: Was Chamberlain's appeasement a policy of peace at any price? http://www.jeffhead.com/obama/chamberlain.jpg Word Count: 1939 IB History: Internal Assessment Candidate: Rasmus Puggaard Hansen Class: 3u School: Birker�d Gymnasium May 2009 Table of Contents A: Plan of Investigation 3 B: Summary of Evidence 3 C: Evaluation of Sources 4 D: Analysis 5 E: Conclusion 7 F: List of Sources 8 A: Plan of Investigation This historical investigation will focus on Neville Chamberlain, "the man who was to become the world's most celebrated and notorious appeaser,"1 and his policy of appeasement, especially from March 1936 to September 1939. In order to successfully go into depth with this assignment, I ordered books on the topic, and the main body of this investigation will outline how Chamberlain's appeasement allowed Hitler's many territorial and political gains in the years leading up to the war. Using various books of different origins and ideas, I will in particular use two books that are of great importance and relevance to my research question, and these are A. J. P. Taylor's The Origins of the Second World War, and Robert J. Caputi's Neville Chamberlain and Appeasement. I will also evaluate these sources for their usefulness and the potential limitations that there may be. By using the books obtained and my own knowledge, I will seek to answer the question: Was Chamberlain's appeasement a policy of peace at any price? B: Summary of Evidence Following the First World War, which had been extremely bloody and expensive, the winning nations and especially Britain realized that never again would they fight such a devastating war. ...read more.

Limitations may include the fact that it was published in 1961. More information are available now than when it was first published, and also the fact that Taylor is very biased limits its value to historians. However this can prove to of value to others, as it can give insight to other ways of thinking. Neville Chamberlain and Appeasement was published in 2000 and is written by Robert J Caputi. It is the first extended historiography of Chamberlain's diplomacy in the years leading up to WWII. It begins by explaining the initial support and criticism that appeasement had in Britain in the prewar period, whereas it moves on to describing why Chamberlain's status and reputation suffered, and still suffers, in the years today. Caputi debates that Chamberlain's failure was largely due to the tense and complicated international situation in the years up to the war. Caputi remains very neutral and avoids taking sides, which is of great value to historians studying this topic, as the information therefore won't be biased. D: Analysis The policy of appeasement originated from the 1920's, as the British already at this time tried to conciliate the Germans with the Dawes and Young plans. However, when Chamberlain became British Prime Minister in May 1937, he altered the policy to suit the current international situation in Europe. "He (Chamberlain) believed in taking the initiative: he would find out what Hitler wanted and show him that reasonable claims could be met by negotiation rather than by force."6 Was Neville Chamberlain an ego maniacal fool, a naive domestic politician utterly out of his depth with Adolf Hitler, though? ...read more.

After giving way to Hitler through the series of events in the 1930's, Chamberlain finally declared war on Germany on the 3rd of September, 1939, when Hitler invaded Poland. Clearly, it had now become obvious to Chamberlain that Hitler had never intended peace: "...his foreign policy aimed at conquest, not at equal justice for Germany."14 Chamberlain abandoned his policy in March 1939, when he had realized that Hitler had unlimited ambitions, as a result of Hitler's breach of the agreement he had with Chamberlain by the full invasion of Czechoslovakia. E: Conclusion In conclusion, it can be stated that Chamberlain's policy of appeasement was not a policy of peace at any price. Chamberlain sought to prevent another world war, and so he tried to improve international relations with Hitler in order to secure 'peace in our time'. When he realized that Hitler could no longer be dealt with through diplomatic negotiations, the policy was finally abolished and war broke out. Appeasement had thus failed, due to the fact that Hitler, fueled by Chamberlain's weak character, tried to gain more and more territory while still in peacetime. Unfortunately, the realization of Hitler's trustworthiness was too late, and Hitler succeeded in annexing Austria, re militarizing the Rhineland and winning the Sudetenland. Had this firmly been his aim, then, logically, after Munich he would have made no further territorial demands and Appeasement would have succeeded. However, we know today, of course, that Hitler was literally insatiable and wished to conquer and subjugate all of Europe, but this was not known at the time of appeasement. ...read more.