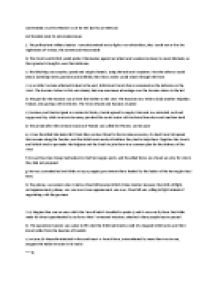 ﻿LIGHTENING WAR TO PHONEY WAR TO THE BATTLE OF BRITAIN SEPTEMBER 1939 TO NOVEMBER 1940 1. The political and military leaders were determined not to fight a war of attrition; they would not re-live the nightmares of Verdun, the Somme and Passcendale b) The French and British would protect themselves against air attack and weaken Germany by naval blockade, as their greatest strengths were their defenses. c) The blitzkrieg was surprise, speed and weigh of attack, using the tank and warplane. First the airforce would attack, bombing enemy positions and airfields; then heavy tanks would smash through the front. ...read more.

The Finns refused and Russians invaded c) Germany and Russia signed a commercial treaty; Russia agreed to supply Grain and raw materials such and copper and tin; while in return Germany provided the soviet union with technical knowhow and machine tools d) The period after the German invasion of Poland was called the Phoney war because e) At sea the allied blockade didn?t look like a serious threat to the German economy. On land French disposed their armies along the frontier, and the British sent nearly all soldiers they had to help them. ...read more.

3. a) Maginot line was an area which the French hadn?t troubled to protect; and it was exactly there that Hitler made his thrust spearheaded by no fewer than 7 armoured missions, attacked where people least expected. b) The operation dynamo was a plan to lift what the British admiralty could of a trapped british army and their drench allies from the beaches of Dunkirk. c) on June 10 Mussolini attacked in the south east- a French force, outnumbered by more than two to one, stopped the Italian invasion in its tracks *** d) e) Chruchill?s government did not want to see the whole of france under the nazi occupation ...read more.