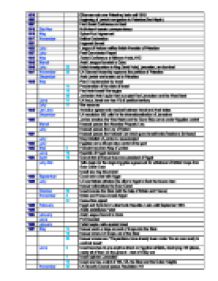 Notes on the History and Development of the Arab-Israeli Conflict

Two days later, Israeli commandos destroyed 14 Arab aircrafts at Beirut airport - In August 1970, five aircrafts were hijacked to Jordan, with the terrorists demanding the release of Palestinian prisoners in Jordan. The planes were blown up after the hostages were released. This action led to the Jordan-Palestinian war, which saw the PLO expelled to Lebanon - King Hussein opposed the PLO, who would restrict his authority on his rule over the Palestinians, and whose actions could have provoked a war with Israel, as the PLO operated out of Jordan - In September 1970 Jordan declares war on the PLO, and the Syrians move in to support the PLO. The SU then supports Syria, and the US support Jordan. - Palestinians, who made up 60% of Jordan's population, hated King Hussein - Black September 1970 PLO thrown out of Jordan because of threat to King Hussein - becoming too powerful and large in number, challenged Jordan army - Hussein crushed Palestinians -> massacre of Palestinian refugee camps killing more than 3000, massacre perpetrated by brother Arabs became known as Black September - In early March 1972, the 'Black September' group hijacked a plane and landed it at Lydda airport in Israel. An Israel army group rushed the plane and rescued the passengers - In September 1972, the BS group killed 11 Israeli athletes at the Munich Olympics - In March 1973, Israel shot down a Libyan Boeing 727 after being warned it was on a suicide mission. After it failed to answer radio calls, it was shot down over the Sinai - Walbank and Hinge: "Whatever the reasons, as a weapon terrorism has had mixed results... it may be successful in keeping the Palestinian cause before the world community... it has tended to put a cloud of illegitimacy and contempt over the various groups within the PLO." Change to Diplomacy: - In 1974 the PLO adopted the 'Stages Plan' stating that a state should be achieved in any area that might be evacuated ...read more.

- The Likud leader Netanyahu narrowly defeated the Labour leader Peres by 29,000 votes, a victory margin of less than 1%. His campaign had played on Israeli fears. - Netanyahu's victory placed the peace process in danger. Through contacts between the Israelis and the Ps continued throughout 1996, Netanyahu made it clear that concessions to the Ps had ended. - His narrow election victory meant that he was weak within his own party and dependent on right-wing member of the Knesset to hold onto poer. - He was seen as an 'obstructionist to the peace process, and he persisted with the controversial construction of Jewish settlements in Arab East Jerusalem. - He was not an experienced politician, and his leadership capabilities were unknown and untested. - He insisted he wanted peace and would honour Israel's commitments so far. However in reality he asserted very different things, including the fact that Israel would never accept a Palestinian state on its doorstep. - In August 1996 he announced that the four year freeze on the expansion of settlements would be lifted, as well as approving 500kms of new roads to link settlements, requiring the confiscation of more Palestinian land. - Netanyahu signalled to Syria that he would be willing to resume negotiations without preconditions but Syria rejected the offer. - He also worked on a 'Lebanon first' approach, which involved withdrawing from Southern Lebanon in return for the cessation of Hizbollah attacks and the integration of the South Lebanon Army into the regular Lebanese army. - Arab leaders met but refused to endorse a Syrian proposal to downgrade relations with Israel. - Netanyahu visited Jordan and Egypt but he refused to meet Arafat. - The autonomous Palestinian area was in serious economic trouble, causing problems for Arafat with the Islamists as well as the Palestinian Legislative Council and the PNC. - In August 1996 Israeli and Palestinian negotiators met for the first time since the Israeli elections... what happened is all above. ...read more.