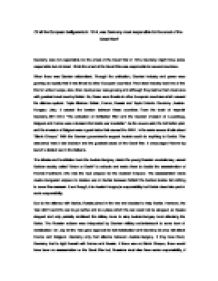 Of all the European belligerents in 1914, was Germany most responsible for the onset of the Great War?

The assassination made Austro-Hungarian emperor to declare war on Serbia because Pshitch the Serbian leader did nothing to cover this assassin. Even though, it is Austria-Hungary's responsibility but Serbia does take part in some responsibility. Due to the alliance with Serbia, Russia joined in the war and decided to help Serbia. However, the Tsar didn't want the war to go further and to a place which the war could not be stopped, so Russia stopped and only partially mobilized the military force to stop Austria-Hungary from attacking the Serbs. The Russian actions were interpreted by German military as tantamount to some form of mobilization. On July 30 the Tsar gave approval for full mobilization and Germany at once will attack France and Belgium. ...read more.

If Britain has said to France and Russia to be neutral, they would follow Britain but he didn't and the peace in the Europe was ended. The responsibility of the onset of the Great Was is shared between several European countries. If Germany had not approve Austria-Hungary emperor to attack Serbia, If Austria-Hungary stopped humiliating Serbia, If Serbia had took an action after the assassin of Francis Ferdinand, If Russia stopped the full mobilization and If Britain had said one word to Russia and France to keep neutral, the war might have stopped and didn't happen. There were several times that the War might have stopped but all those times, the countries didn't do anything to stop them. So, the responsibility of onset of the WW1 is shared between those countries, which did nothing to prevent the war. ...read more.