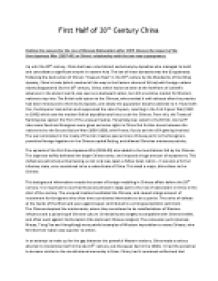 Outline the reasons for the rise of Chinese Nationalism after 1919. Discuss the impact of the Sino-Japanese War (1937-45) on Chinas relationship with the two new superpowers.

﻿First Half of 20th Century China Outline the reasons for the rise of Chinese Nationalism after 1919. Discuss the impact of the Sino-Japanese War (1937-45) on China?s relationship with the two new superpowers. Up until the 20th century, China had been ruled almost exclusively by dynasties who managed to build and consolidate a significant empire in eastern Asia. The last of these dynasties was the Qing dynasty. Following the destruction of China?s ?treasure fleet? in the 15th century by the Mandarins of the Ming dynasty, China?s trade (which reached all the way to the Eastern shores of Africa) with foreign nations slowly disappeared. By the 19th century, China, which had once been at the forefront of scientific advances in the ancient world, was seen as a backward nation, but still a lucrative market for Western nations to tap into. The British sold opium to the Chinese, who smoked it with tobacco after the practice had been introduced to them by Europeans, and slowly the population became addicted to it. Faced with this, the Emperor took action and suppressed the sale of opium, resulting in the First Opium War (1839 to 1842) which saw the modern British expeditionary force crush the Chinese. From this, the Treaty of Nanking was signed: the first of the unequal treaties. Hong Kong was ceded to the British, low tariff rates were fixed and foreigners were given exclusive rights in China. But further issues between the nations led to the Second Opium War (1856-1859), with France, Russia and the USA getting involved. The war culminated in the treaty of Tientsin treaties opened more Chinese ports to the foreigners, permitted foreign legations in the Chinese capital Beijing, and allowed Christian missionary activity. The episode of the First Sino-Japanese War (1894-95) also added to the humiliations felt by the Chinese. The Japanese swiftly defeated the larger Chinese army, and imposed a huge amount of repayments. ...read more.

But Chiang couldn?t allow that to happen, and announced that ?the limits of endurance had been reached? ? the Chinese would fight the Japanese this time. A national conference was held, attended even by the communists (represented by Zhou Enlai). At the same time, Mao in Yan?an (the Communist base after the Long March) declared a policy of ?total resistance by the whole nation? (even though the communists controlled just a small part of the country). Even though the Chinese were ill-prepared to fight a war on this scale, Chiang felt like they had no choice. The Japanese were rather unprepared for a conflict of such a large scale: they had committed only 250,000 men in the north of China for the conflict. But Chiang mobilized his army, and actually went boldly on the offensive, moving in his best equipped army: a German-trained force to capture Shangai where the Japanese had landed. This would turn into a disaster for the Chinese and mark an escalation of the war for the Japanese (proof that Chiang should have read more carefully Sun Tzu?s book) who would devote more resources to the conflict than they could really afford. Between August and November 1937, the Chinese and Japanese fought for control of the city. The battle eventually cost the Chinese more than 250,000 men ? and dealt a serious blow to morale as these were the best Chinese troops. The Japanese lost between 40 and 70 thousand men, far more than they had expected. But the Japanese had still managed to gain complete air superiority thanks to their aircraft carriers, and had managed to destroy any attacking capability the Chinese had had. The Chinese withdrew in November, and started to build defensive positions around Nanking. Following the defeat in Shangai, Chiang and the government fell back to Wuhan, leaving 90,000 troops to defend the city under the command of an opium-smoking ex-warlord, who fled after several days of artillery bombardment. ...read more.

In December 1950, China seized all American assets and properties, totaling $196.8 million. Mao would not forget the fact that both the Soviets and the Americans had backed the Nationalists. But the Chinese civil-war was for the most part just that: a war between two groups part of a same nation. There was almost no interference from the outside, although Russia did often get in the way of the Communists initially (and even as late as 1949 advised the Communists not to cross the Yangtze ? Stalin was not much of a risk taker), while the Americans provided lots of supplies (and 2$ billion in aid) for the Nationalists, it was the Chinese who determined the outcome of the war. Chiang?s embarrassingly poor leadership led to his swift and impressive defeat by the Communists, who emerged as the unlikely victors of a long war. Claims that China was another battleground of the cold war can also be dismissed, as both superpowers largely favored the GMD. Some say Truman should have done more. However the USA was not ready to enter another war abroad when none of its interests had been threatened - public opinion would never agree with such a move. Besides, the USA had a serious lack of trust in Chiang and he would have cost Americans more lives than it was really worth. The Americans and the People?s Republic of China would only meet again in 1972 during Nixon?s visit. On the other hand, Mao was invited to Moscow to celebrate Stalin?s birthday. There he was kept in a house outside of the city for over a week doing nothing. When he finally met Stalin for a talk, he was yelled at. A lot. So there was some resentment between the two nations, as for some reason Stalin didn?t want a second communist country. But before Mao left, Stalin instructed him to watch Vietnam and Korea, as communist movements there were developing. In 1960, the USSR would cut all diplomatic relations with the Chinese. The dispute between the two powers definitely had its roots in the Chinese civil war. ...read more.