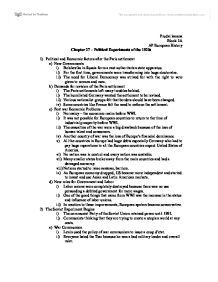 Political Experiments of the 1920s

Prudvi kasana Block 1A AP European History Chapter 27 - Political Experiments of the 1920s 1) Political and Economic factors after the Paris settlement a) New Governments i) Bolsheviks in Russia form a vast authoritarian state apparatus. ii) For the first time, governments were transforming into huge electorates. iii) The need for Liberal Democracy was strived for with the right to vote given to women and men. b) Demands for revision of the Paris settlement i) The Paris settlements left many troubles behind. ii) The humiliated Germany wanted the settlement to be revised. iii) Various nationalist groups felt that borders should have been changed. iv) Some countries like France felt the need to enforce the settlement. c) Post war Economic Problems i) Normalcy - the economic realm before WWI. ii) It was not possible for European countries to return to the time of industrial prosperity before WWI. iii) The casualties of the war were a big drawback because of the loss of human talent and consumers. iv) Another country of war was the loss of Europe's financial dominance. v) All the countries in Europe had huge debts especially Germany who had to pay huge reparations to all the European countries expect United States of America. vi) No nation was in control and every nation was unstable. ...read more.

The Rise of Mussolini i) Italian Fasci di Combattimento was created because they felt that Italy was left out of the fruits of the hard won victory of WWI at the Paris settlement. ii) Benito Mussolini was the leader of this group, and he was born to the son of a blacksmith. iii) Mussolini was replaced by Nationalism rather than Socialism. iv) Gabriele D'Annunzio was an extreme nationalist writer who was the main spokesperson for Mussolini's campaign. b) The Fascists in Power i) November 23, 1922 - The king and the parliament granted Mussolini dictatorial authority for one year to bring order to the local and regional government. ii) Chamber of Deputies - the fascists got complete control of this chamber of parliament which would put the fascists in control of Italy. iii) Soon, fascist propaganda, Mussolini was surrounded by a new era of fascist followers. c) Motherhood for the Nation in fascist Italy i) The government gave 25 percent of women more power in the workforce. 4) Joyless Victors a) France: The Search for Security i) The French people after WWI elected a conservative Chamber of Deputies like after other major wars. ii) French government created a number of new alliances like with Russia to replace pre war alliances. iii) They made a series of eastern alliances to strengthen their hold on Europe. ...read more.

Invasion of the Ruhr and Inflation i) Inflation made German economy struggle. ii) Children started to use packets of paper money as building blocks. iii) An American dollar was worth 64 German marks after war compared to 4.2 before war. iv) The French invasion of the Ruhr and the passive aggression by Germany made many labor unions in Ruhr angry at the Weimar republic and succumbed to French rule. d) Hitler's Early career i) Adolf Hitler started to grow in the ranks of the German army and would soon become the president. ii) Hitler created the National Socialist German Worker's Party, or commonly known as Nazis. iii) Hitler adopted the policy of anti-Semitism and many other grueling policies. iv) Hitler was jailed for his party rallies and his oppression to the Weimar republic. v) He wrote mein kampf, my struggle, from his jail and gained the support of many people. vi) With the book, he made considerable amount of money. e) The Stresemann Years i) The Weimar republic was trying to repair the inflation problem and it hired Gustav Stresemann. ii) Stresemann was responsible for bringing the German economic crisis back under control. iii) He created a number of policies including a new plan for paying repartitions. f) Locarno i) The Locarno Agreements was a reaction to the developments of the German economy. ii) Locarno made major policies which pleased every country included in the Paris settlement. iii) He satisfied all parts of the treaty and made sure everyone was getting their share of the fruits. ...read more.