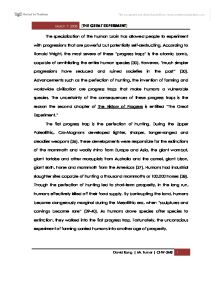 The specialization of the human brain has allowed people to experiment with progressions that are powerful but potentially self-destructing. According to Ronald Wright, the most severe of these "progress traps" is the atomic bomb, capable of annihilating the entire human species (30). However, "much simpler progressions have seduced and ruined societies in the past" (30). Advancements such as the perfection of hunting, the invention of farming and worldwide civilization are progress traps that make humans a vulnerable species. The uncertainty of the consequences of these progress traps is the reason the second chapter of The History of Progress is entitled "The Great Experiment." The first progress trap is the perfection of hunting. ...read more.

Fortunately, the unconscious experiment of farming carried humans into another age of prosperity. The second progress trap is the invention of farming. During the start of the Neolithic era, humans began influencing flora growth by sowing the most easily reaped plants and the plumpest seeds (41). The domestication of plants occurred at breakneck speed on every continent except Antarctica (42). Significant agricultural surpluses resulted in the Middle East, the Far East, Mesoamerica and the Andean region of South America (42). No other invention rivals farming as modern day humans survive on crops domesticated in 5000 B.C. However, farming achieved quantity at the expense of quality; more food and more people, but seldom better nourishment or better lives. ...read more.

Hitler's Lebrensraum, the Inquisition bonfires, and the Aztec sacrifices have all been the work of highly-civilized societies (49). "All of us are riding on [worldwide civilization]; few would get off alive" (34). The great experiment of civilization has trapped humans to a point where a future nuclear war could create "a major hiatus in this planet's life" (31). Therefore, civilization is the final progress trap. The success of the current worldwide civilization is owed to a climate tailored to farming. The last 10,000 years, which has had extremely stable climate, is also the lifetime of agriculture and civilization (52). Therefore, humans are trapped at the mercy of the climate, where if the climate balance is offset, "the great experiment of civilization will come to a catastrophic end" (52). ...read more.