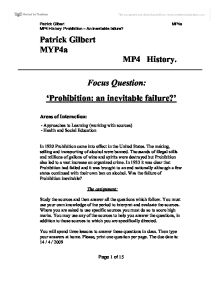 Patrick Gilbert MYP4a MP4 History. Focus Question: 'Prohibition: an inevitable failure?' Areas of Interaction: - Approaches to Learning (working with sources) - Health and Social Education In 1920 Prohibition came into effect in the United States. The making, selling and transporting of alcohol were banned. Thousands of illegal stills and millions of gallons of wine and spirits were destroyed but Prohibition also led to a vast increase on organized crime. In 1933 it was clear that Prohibition had failed and it was brought to an end nationally although a few states continued with their own ban on alcohol. Was the failure of Prohibition inevitable? The assignment: Study the sources and then answer all the questions which follow. You must use your own knowledge of the period to interpret and evaluate the sources. Where you are asked to use specific sources you must do so to score high marks. You may use any of the sources to help you answer the questions, in addition to those sources to which you are specifically directed. You will spend three lessons to answer these questions in class. Then type your answers at home. Please, print one question per page. The due date is: 14 / 4 / 2009 1. Study sources A and B. How far do these two accounts agree about the causes and the consequences of Prohibition? Both sources A and B discuss the causes of Prohibition, and the Consequences of Prohibition. Source A is an excerpt from an American History book, published in 1973, and Source B is, similarly, an excerpt from a book about American history which was published in 1979. Therefore there is little reason to doubt the reliability of both sources; They were both published long after Prohibition, and therefore probably wouldn't tell lies or use sophistry. The only concern one could conjure is that they were produced after the time, therefore might be slightly inaccurate. ...read more.

What's said in the source, furthermore, isn't what actually happened. John F. Kramer mentions: "The law will be obeyed in cities....The law says that liquor must not be manufactured. We shall see that it is not manufactured. Nor sold, nor given away." This didn't happen at all. Speakeasies were introduced, a form of 'underground' Saloon. Therefore liquor was sold. And to sell the liquor, it has to be manufactured - therefore it was manufactured. We also know that the law was not obeyed in cities. There were humungous amounts of corrupt police officers, and briberies. The law was not obeyed at all, and America had turned even more anarchistic than before the introduction of Prohibition. Therefore, I consider this source very unreliable as evidence of Prohibition. It was said at a time when they had not experienced Prohibition's effect, it was said by a man whose opinion would naturally be biased and the things he says did not actually happen. It is a very unreliable source as evidence of Prohibition. Which is more reliable - Source E or F? This is quite obvious - Source E. Its provenance is much more reliable - it was written by someone who was evidently 'open-minded', at a time when they had 12 years experience of Prohibition. Furthermore, what was said in the text actually happened (which we know is true through reference to other sources and background knowledge). Source F, on the other hand, has a unreliable provenance and what was mentioned in it didn't make sense. Therefore Source E is more reliable as evidence about Prohibition. 4. Study sources G and H. Do these two sources prove that Prohibition was successful? Explain your answer. Source G and H are epidemiological evidence of Prohibition's effectiveness. They show, through statistics, how Prohibition officers seized more and more spirits and drunk people. Source G is statistics showing the activities of Federal government agents enforcing Prohibition, 1921 -1929. ...read more.

A different reason which suggests that Prohibition might have been successful is that in 1920, there was a general need to preserve grain for food. "...the wartime concern for preserving grain for food..." - From Source A. If this feeling had been kept up, Prohibition might not have failed. Furthermore, there were quite a lot of members who supported the Anti Saloon League and the Women's Christian Temperance Union. (At that time, around 1920, the Women's Christian Temperance Union had approximately 350 000 members1, which was and still is its all time highest. The Anti Saloon League consisted of fewer members, yet had a great number of supporters). It therefore seemed unlikely that Prohibition would fail - with so many campaigns against alcoholism, how was it that such a great number of people disliked the law? Source B supports this viewpoint: "In 1917 a nation-wide campaign, led by the Anti-Saloon League, brought pressure to bear on Congress to ban ..... That victory encouraged the supporters of the league to push for an amendment of the USA. In 1919 the amendment was passed." The overall opinion was, however, that Prohibition would fail. Yes, there were reasons to believe that Prohibition would work; as shown by aspects of Sources A, B, C and D. There were furthermore a lot of members involved in organizations against alcohol such as the Woman's Christian temperance Union and The anti-Saloon league, as well as many Americans wanting to preserve grain for food, as opposed to using it as grain for brewery However, I believe there was a greater chance that Prohibition would fail. This is supported by elements of Sources A, B, I, J, and ultimately K (though K was published at the end of Prohibition- so I felt no need to mention it in this answer). I feel that Prohibition couldn't have worked; it caused briberies and crimes, however, and perhaps most of all: it went against a great percentage of the population's wills and desires. 4,773 Words. 1 Information obtained from: http://en.wikipedia.org/wiki/Woman%27s_Christian_Temperance_Union Patrick Gilbert MP4a MP4 History: Prohibition - An inevitable failure? Page 15 of 15 ...read more.