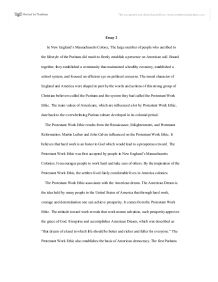 Essay 2 In New England's Massachusetts Colony, The large number of people who ascribed to the lifestyle of the Puritans did much to firmly establish a presence on American soil. Bound together, they established a community that maintained a healthy economy, established a school system, and focused an efficient eye on political concerns. The moral character of England and America were shaped in part by the words and actions of this strong group of Christian believers called the Puritans and the system they had called the Protestant Work Ethic. The main values of Americans, which are influenced a lot by Protestant Work Ethic, date back to the overwhelming Puritan culture developed in its colonial period. ...read more.

It inspires and accomplishes American Dream, which was described as "that dream of a land in which life should be better and richer and fuller for everyone." The Protestant Work Ethic also establishes the basis of American democracy. The first Puritans coming to America signed the Mayflower Compact; the compact reflects the principle that the minority is subordinate to the majority. They practice the autonomy, and everyone has the rights of equality and liberty. Gradually it becomes the groundwork of American democracy. The Protestant Work Ethic influences the American colonial history a lot. The Great Awakening, which designed by ministers to restore spiritual intensity to church life and authority, reinforces Protestant Work Ethic by attacking complacency of the soul, feels free of the material world and urges individuals to refrain from sinful activities. ...read more.

Americans realize the road to the financial success of the American Dream is more a matter of hard work than luck; hence they keep the Protestant Work Ethic and engage in working to get prosperity. For example, students study hard in order to find a decent job, so that they can get prosperity to lead satisfying lives. Due to the economy crisis these days, many companies reduce their staff. In order to hold their job, many Americans work even harder than they used to, because they think hard work is the best way to lead their way to prosperity. The Protestant Work Ethic accounts for a large part of American success and also permeates Americans' thinking now. In all, Protestant Work Ethic affects both the historical development of the United States and America today; it plays an important part in the growth of America. ...read more.