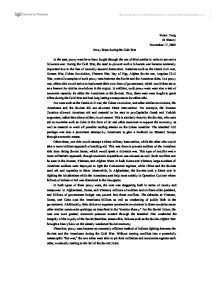 Proxy Wars during the Cold War

Proxy Wars during the Cold War

In the past, proxy wars have been fought through the use of third parties in order to prevent a full-scale war. During the Cold War, the need to prevent such a full-scale war became extremely important due to the fear of mutually assured destruction. Instances such as the Greek civil war, Korean War, Cuban Revolution, Vietnam War, Bay of Pigs, Afghan Soviet war, Angolan Civil War, were all examples of such proxy wars between the Soviet and the American sides. In a proxy war, either side would strive to implement their own form of government, which would then serve as a beacon for similar revolutions in the region. In addition, such proxy wars were also a test of economic capacity for either the Americans or the Soviets. Thus, these wars were fought to great effect during the Cold War and had long lasting consequences for either side.

For wars such as the Greek civil war, the Cuban revolution, and other similar revolutions, the Americans and the Soviets did not advocate direct intervention. For example, the Truman Doctrine allowed American aid and materiel to be sent to pro-Capitalist Greek and Turkish supporters, rather than direct military involvement. This is similarly done by the Soviets, who sent aid to countries such as Cuba in the form of oil and other resources to support the economy, as well as materiel to ward off possible landing attacks on the Cuban coastline. The Marshall Aid package was also a prominent attempt by Americans to gain a foothold on Western Europe through economic means.

Other times, one side would attempt a direct military intervention, while the other side would take a more indirect approach of sending aid. This was done to prevent soldiers of the American side from facing Soviet forces, which would spark a full-scale war. This type of conflict was a more militaristic approach, though economic expenditure was colossal as well. Such conflicts can be seen in the Korean, Vietnam, and Afghan Wars. In both Korea and Vietnam, large numbers of American soldiers were deployed to fight the Communist regimes, while China and the Soviets send aid and expertise to them. Meanwhile, in Afghanistan, the Soviets took a direct role in fighting the Mujahedeen while the Americans sent help most notably in Operation Cyclone where billions of dollars of aid was channeled to the insurgents.

In both types of these proxy wars, the cost was staggering both in terms of money and manpower. In Afghanistan, Korea, and Vietnam, millions of soldiers and civilians alike perished, and billions of government budget was poured into these conflicts. The debacles at Vietnam, Korea, and Cuba cost the Americans billions as well as weakening of public faith in the government. Additionally, their failure to suppress communist revolutions in these countries cause other similar communist uprisings, as described in the “domino theory.” For the Soviet Union, the cost was even greater; economic pressure exerted through the Marshall Plan weakened the integrity of the loyalty of the Soviet Satellites. Meanwhile, failures such as the Soviet-Afghan War brought a heavy blow on the already weakened Soviet economy.

Therefore, proxy wars became an extremely efficient method of indirect fighting between the Soviets and the Americans during the Cold War. Without turning conflicts into a potentially catastrophic “hot war,” the two sides were able to pit their militaries and economies against each other, eventually leading to the fall of the Soviet Union.