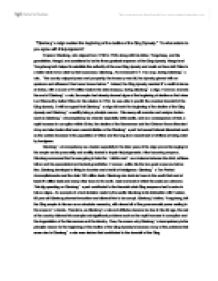 Qianlongs reign marked the beginning of the decline of the Qing Dynasty. To what extent do you agree with this judgement?

"Qianlong's reign marked the beginning of the decline of the Qing Dynasty." To what extent do you agree with this judgement? Emperor Qianlong, who reigned from 1736 to 1795, along with his father, Yongzheng, and his grandfather, Kangxi, are considered to be the three greatest emperors of the Qing dynasty. Kangxi and Yongzheng both helped to establish the authority of the new Qing dynasty and could not have left China in a better state to be ruled by their successor, Qianlong_. As Immanuel C.Y. Hsu says, during Qianlong's rule, "the country enjoyed peace and prosperity; the treasury was full, the dynasty glowed with an opulance and affluence it had never known before."_ Indeed, the Qing dynasty reached it's zenith in terms of riches, with a record of 70 million taels in the state treasury, during Qianlong's reign. However, towards the end of Qianlong's rule, the empire had already showed signs of the beginning of decline so that when Lord Maccarthy visited China for his mission in 1793, he was able to predict the eventual downfall of the Qing dynasty_. It will be argued that Qianlong's reign did mark the beginning of the decline of the Qing dynasty and Qianlong's senility being a principle reason. This essay will examine and analyse factors such as Qianlong's incompetency as a leader especially while senile, and as a consequence of that, a rapid increase in corruption within China, the decline of the ...read more.

Corruption was in control during Yongzheng's reign because of Yongzheng's tight control over his officials. Yongzheng granted 'anti-corruption funds' and severely punished those who charged surtax or practiced irregularities. However, in senile Qianlong's empire, corruption in forms of graft, extortion and irregular levies was to be expected and even systematic. Heshen, for example, was very openly corrupt, his property confiscated by Jiaqing after Qianlong's death was worth 800,000,000 taels, and yet he was not properly punished by Qianlong_. According to Hsu, "[Heshen's] satellites in the government followed the suit and his associates in the military service unnecessarily prolonged campaigns as to have the benefits of additional funds." This shows that Heshen was only one of the many other officials all over China that were corrupt and even granting 'anti-corruption fees' could not stop them. Corruption took a large toll on the poorer citizens of China because they were the ones being exploited. General discontent at the unfairness of the society fueled rebellions such as the White Lotus. The White Lotus rebellion that started in the 1796, a year after Qianlong had abdicated and was ruling behind the scenes, was a protest against the extortion of tax collectors _. Another consequence of the Qianlong's lack of asserted authority was the decline of the Bannermen and the Chinese Green Standard Army. ...read more.

The Manchu government tried to mitigate the discontent by keeping the system of rule of the Ming government, promoting Neo Confucianism which was the popular religion in China at the time and allowing Han Chinese into its bureaucracy. However, the Qing also did much to show that the Manchus were separate and superior, for example, they established the Imperial Clan Court to supervise births, education and marriages for the Manchus and Manchu and Chinese intermarriages were prohibited as well as Chinese immigration to Manchuria. As Hsu puts it, in the end, "the very fact that the Qing was an alien dynasty continuously evoked Chinese protest in the form of secret society activites and nationalistic racial revolt and revolution." _ In this sense, because the Han Chinese would never have been content with being ruled by foreigners, internal discontent and rebellion was guaranteed and the Qing dynasty was 'doomed from the very beginning'. In conclusion, Qianlong's reign did mark the beginning of the decline of the Qing dynasty because many of the problems that arose was due to Qianlong and Qianlong's senility was a principle reason because it caused him to become incompetent as a leader, allowing corruption to increase and the Bannermen to decline. However, there were other factors such as the sudden and rapid population increase of China and rebellions because the long term resentment of the Han Chinese at being ruled by foreigners, both unfortunately also happened during Qianlong's reign, that contributed to the perhaps inevitable decline and downfall of the Qing dynasty. ...read more.