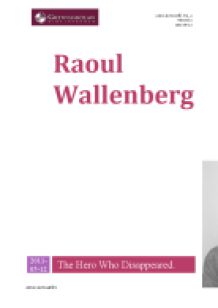 Raul Wallenberg; this is the story about his life. Who was he and what did he do?

ï»¿Anton Jerntved©, Pre_A Historia A 2011-05-12 Raoul Wallenberg 2011-05-12 The Hero Who Disappeared. Table of Contents EARLY LIFE Wallenberg start his “work” WALLENBERG GIVE OUT PASSPORTS DISCUSSION SUMMARY ADDITONAL FACTS SOURCES A Swedish man impress the German soldiers so much that when they had order to shoot him, they miss him on purpose. Same man save over 97 000 Jews by himself. The man is named Raul Wallenberg; this is the story about his life. Who was he and what did he do? EARLY LIFE August 4th 1912, Maja Wallenberg_gave birth to a boy named Raoul Gustaf Wallenberg. The father, Raoul Oskar Wallenberg died 3 month before the birth. In 1918, Maja remarried to a Fredrik Von Dardel. Even without a biological father, Raoul’s life was not as hard as for a normal boy. His surname “Wallenberg“ implicated that he came from one of Sweden’s wealthiest family. Before Raoul’s father died, he was an officer in the navy. His two cousins, Jacob and Marcus Wallenberg, were two of Sweden’s most famous entrepreneurs and bankers. Raoul was the great-grandchildren to André Oscar Wallenberg, who established Stockholm Enskilda Bank e.g. ...read more.

But the Hungarian government did not like him. Then Lauer suggested Raoul Wallenberg for the committee. He said that he believed that Raoul?s was the perfect man for the work and he also had a good surname. A majority in the committee had the opinion that he was too young and to fresh. But Lauer was the man who decided. Raoul got the work and were really eager to travel to Hungary. He began by writing to the Ministry of Foreign Affairs and requested permission to contract with whomever he want, without any needs to contact the embassy, he also wanted to avoid bureaucracy and paperwork, and be allowed to take ?shortcuts?, when sending important material to special people. The letter was so unusual that it was sent up to the Prime Minister PerAlbin Hansson, who consulted the king before he agreed to requirements. WALLENBERG GIVE OUT PASSPORTS During the same time that Raoul came to Hungary in July 1944, had the Germans under the leadership of Adolf Eichmann, dispatched more than 400 000 men, women and children. Head of the Red Cross in Hungary, Valdemar Langlet, helped the Swedes. ...read more.