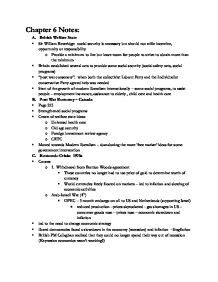 ? Fredrich Hayek o Critic of collectivism (and Keynes) o Believed for collectivism to work the government needed to control the economy which would eventually lead to the government controlling social aspects of people's lives o Believed it was impossible for government to have the knowledge and ability to make all economic decisions * Government controlled supply but would never have enough knowledge of demand ? Both promoted Price System, Free market o Only way to balance supply and demand and maintain individual liberty E. Price System/Free Market * There are 5 key characteristics in a market economy 1. Private ownership/freedom to buy and sell o Goods and services must belong to the individual who is free to sell them for whatever price they can convince a buyer to pay o The buyer is free to seek out the best deal possible 2. Free competition o Businesses are free to produce whatever they want, however, many businesses can produce the same goods o Competition helps keep prices low for consumers 3. Prices are set by forces of supply and demand o Price is determined by how much is available compared to how much the consumer wants it. ...read more.