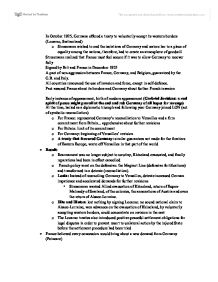 Revision notes on the Locarno treaty. In October 1925, Germans offered a treaty to voluntarily accept its western borders (Locarno, Switzerland)

In October 1925, Germans offered a treaty to voluntarily accept its western borders (Locarno, Switzerland) o Stresemann wished to end the isolations of Germany and restore her to a place of equality among the nations, therefore, had to create an atmosphere of goodwill Stresemann realized that France must feel secure if it was to allow Germany to recover fully Signed by Brit and France in December 1925 A pact of non-aggression between France, Germany, and Belgium, guaranteed by the G.B. and Italy. All countries renounced the use of invasion and force, except in self-defence. Pact assured France about its borders and Germany about further French invasion Early instance of appeasement, birth of modern appeasement (Garbriel Javisicas: a real spirit of peace might prevail at the end and rob Germany of all hopes for revenge) ...read more.

o Hite and Hinton: lost nothing by signing Locarno: no sound national claim to Alsace-Lorraine, won advances on the evacuation of Rhineland, by voluntarily accepting western borders, could concentrate on revision in the east o The Locarno treaties also introduced positive peaceful settlement obligations for legal disputes in order to prevent resort to unilateral action by the injured State before the settlement procedure had been tried * France believed every concession would bring about a new demand from Germany (Poincare) * Stresemann transformed Germany from being an outcast, to being actively involved in European diplomacy: the spirit of Locarno was in Europe * French and Allied withdrawal from Rhineland delayed * Peukert argues that Stresemann should have accepted Germany's borders and concentrated on building economic and political influence in the new states in eastern and south-eastern Europe. ...read more.

From their point, Locarno marked the moment when GB regarded its European responsibilities as fully discharged. By pledging themselves to Rhine, turned their backs on Europe-or so they thought. Splendid isolation had come again * Ephraim Lipson (British economic historian) o Greatest diplomatic achievement of the peace years 1918-39. o Gave to France the security which was the goal of her policy, and to Germany the status (LON 1926) * Henrik Eberle (German historian) o Treaty of Locarno described the French positions as necessary for France's security. Moreover, left bank of the Rhine had been important element in French policy, which aimed at hegemony in central Europe. The remilitarisation of the Rhineland would therefore be a blow to two of the salient features of the French policy: the striving for security, which had become even more urgent since WWI, and military supremacy in central Europe. ...read more.