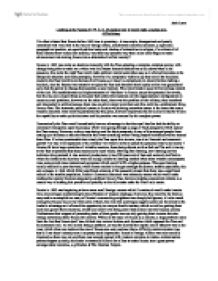 Russia in 1682 was under an absolute monarchy with the Tsar adopting a complete complete power, with change being able to made on a whim even his Boyars denoted themselves as his slaves when in his presence, this under the right Tsar could make political

Looking at the Factors (P, FP, E, R, G) explain how it would make a leaders rule difficult/easy It's often inferred that Russia before 1682 was in quandary - it was ample, disorganized and poorly controlled with very little in the way of foreign affairs, a backward economic structure, a capricious geographical position, an age-old political setup and clashes of extremities in religion, it's evident all of these factors threw russia into anarchy, was there any possible way that a ruler could begin to make advancement into turning Russia into a able-bodied unified country? Russia in 1682 was under an absolute monarchy with the Tsar adopting a complete complete power, with change being able to made on a whim even his Boyars denoted themselves as his slaves when in his presence, this under the right Tsar could make political control somewhat easy as it allowed decisions to be abrupt and absolute and made promptly, However it's completely viable to say that not all the decisions made by the Tsar would be to the benefit of Russia as it wasn't a compulsion to consult before making a decision, also the Boyars were tentative to upset the Tsar and therefore their loyalty to him was guaranteed as he had the power to change their position at any moment. This would make it easy for him to keep control of the rich. ...read more.

would make making the country function adequately a problem for any Tsar, however making economical reforms is a certain way of making this possible and possibly as the title states make the Tsar's rule easier. Russia in 1682 was beginning to have some small foreign contact which if continued would make it easier for a ruler to begin modernizing by the affiliation of western ideology, However, this would be far from an easy task to accomplish as many of Russia's surrounding neighbors were deeply belligerent, it's also worth noting that Russia was at war with some of them, but even this seemingly negative point can be turned to the leader's advantage as it allowed the opportunity to conquer hostile territory which as well as gaining them land also gained them resources, wealth and could even bring some fresh culture into the Russian society. Furthermore their support of promoting trade of their goods was not only gaining them income but also foreign awareness about Russia the country. Whilst on the topic of Russia as a country, a large problem came from the fact that Russia itself was divided into various factions and dynasties which opposed the Tsar and his autocratic rule. As well as this being a problem, so was the fact that the capital city of Moscow was in the west, which when one looks at the size of Russia one soon realizes what a difficulty communication was, that's if one hasn't already seen it as pretty much impossible. ...read more.

Most of Russia was under constant risk of attack because of it's neighboring countries hostile temperament. Also because of the Western and Eastern influences of Russia it was culturally backward which made it difficult to implement changes without difficulty for the Tsar. Russia's east would make it very difficult for a Tsar to help control and relations with neighboring countries would either need to be improved or Russia's military would need to have their strength increased in order to keep it's position that of secure. In Conclusion when Peter assumed the role of Tsar, politically he'd need to be more secure and an autocrat but would need to gain control over the army if his rule would to be easy. However when facing economic problems, his position would be difficult as the systems which were in place at present were backward and inadequate which also wasn't complimented by their foreign policy which made trade with other countries difficult. Geographically, he'd face various problems including inadequate land and being surrounded by aggressive neighbors. Religion would also cause another major problem with it's prevention of westernization, making it difficult for Russia to be more forward as a country, As a whole Peter was going to need to face a great number of difficulties in modernizing Russia but there was also advantages he could make use of to make changes such as his absolute power and the vast resource russia possessed. Jack Lowe Jack Lowe ...read more.