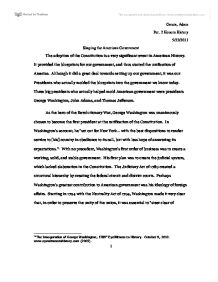 The adoption of the Constitution is a very significant event in American History.  It provided the blueprints for our government, and thus started the unification of America.  Although it did a great deal towards setting up our government, it was our Presidents who actually molded the blueprints into the government we know today.  Three big presidents who actually helped mold American government were presidents George Washington, John Adams, and Thomas Jefferson.

As the hero of the Revolutionary War, George Washington was unanimously chosen to become the first president at the ratification of the Constitution.  In Washington’s account, he “set out for New York… with the best dispositions to render service to [his] country in obedience to its call, but with less hope of answering its expectations.”[1]  With no precedent, Washington’s first order of business was to create a working, solid, and stable government.  His first plan was to create the judicial system, which lacked elaboration in the Constitution.  The Judiciary Act of 1789 created a structural hierarchy by creating the federal circuit and district courts.  Perhaps Washington’s greatest contribution to American government was his ideology of foreign affairs.  Starting in 1794 with the Neutrality Act of 1794, Washington made it very clear that, in order to preserve the unity of the union, it was essential to “steer clear of permanent Alliances with any portion of the foreign world [European Affairs].”[2]   This address further proclaimed America’s desire to break all political ties from Britain.

Succeeding Washington was John Adams.  After the Declaration of Independence and the victory of the Revolutionary War, Adams continued his work to help nurture the new country and help it grow and develop.  He was an active supporter of the Constitution and the balance of power included in the document.  He noticed that Articles I and II (Legislative and Executive respectively) went into great depth to define the roles of each branch, but Article III was very vague in outlining the powers of the judicial branch.  However, since he believed in strong checks and balances, he felt that the judicial branch needed improvement.  A lawyer by profession and current vice president, Adams had great influence in the development of the Judicial Act of 1789.  During Adam’s presidency, in 1801, he appointed Chief Justice John Marshall because they shared a common belief in how the Court should operate.  Marshall took on the difficult cases that his four predecessors had avoided.  His predecessors failed to issue strong opinions or even take on controversial cases.  However, in 1803, Marshall took on the case Marbury v. Madison.  His ruling established the Court’s position in government, giving the Supreme Court the power of judicial review, or the ability to declare a law unconstitutional.  This helped create more equality within the three branches.

The election of 1800 pitted John Adams against Thomas Jefferson, in a hard-fought struggle to power.  Jefferson eventually won, and in his inaugural address, he attempted to unify the two competing political parties: “Every difference of opinion is not a difference of principle… We are all Republicans; we are all Federalists.”[3]  This reflected his views of government, which became known as Jeffersonian republicanism.  This stated the need that a simple government best suits the needs of the people, therefore needing to simplify all conflicts in the government.  Jefferson held that the common people should control the government.  In accordance with these beliefs, Jefferson had performed the most important act of his presidency, purchasing the Louisiana territory from France.  In 1803, when asked to buy the land from Napoleon, Jefferson doubted whether the Constitution gave him the power to do so.  Contrary to his own beliefs of strict interpretation of the Constitution, he bought the Louisiana territory at 4 cents an acre.  This more than doubled the size of America, giving America the opportunity to create many more states.  The Louisiana Purchase decreased the power of the federal government by increasing the quantity of state governments.

In conclusion, three presidents who shaped the government into what we know it today were George Washington, John Adams, and Thomas Jefferson.  George Washington did a monumental job in establishing the executive and judicial branches after the constitution.  John Adams then furthered Washington’s goals by (unintentionally) strengthening the Supreme Court through the power of judicial review.  Thomas Jefferson, with the basic structure of government already in place, contributed to the expansion of the government through his acquisition of the Louisiana territory.

"Analyze the Contributions of Washing and Jefferson in Helping Establish a Stable Government after the Adoption of the Constitution." Get Essays, Research Papers, Term Papers & College Essays Here. Web. 11 Oct. 2010. <http://www.writework.com/essay/analyze-contributions-washing-and-jefferson-helping-establ>.

"George Washington." American History and World History at Historycentral.com the Largest and Most Complete History Site on the Web. Web. 10 Oct. 2010. <http://www.historycentral.com/Bio/presidents/washington.html>.

[2] Gerald A. Danzer et al., “Launching the New Nation”, The Americans: Reconstruction to the 21st century: 74.