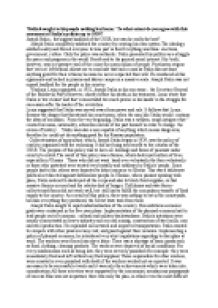 Stalin brought to his people nothing but harm.' To what extent do you agree with this assesment of Stalin's policies up to 1939

﻿'Stalin brought to his people nothing but harm.' To what extent do you agree with this assesment of Stalin's policies up to 1939? Joseph Stalin - the biggest landlord of the USSR, but was he really the best? Joseph Stalin completely subdued the country by creating his own system.The ideology alsified reality and forced everyone to take part in this Everything was false: elections, government, culture. Only the police was authentic. Stalin presented his politics as a struggle for peace and progress in the world. Hereferred to the general social interest. His 'truth', however, was a repressive tool of the crime for many milion of people. Psychiatric stigma that 'red car' left behind, allows me to conclude that such a man as Stalin has not done anything good for their citizens, because he never respected their will. He murdered all his opponents and locked in prisons and labour camps on a massive scale. Joseph Stalin was not a good landlord for the people in his country. ...read more.

Kolkhozes and state farms - collectivized farms did not work well, but still had to fulfill the compulsory transfer of food supply to the country. As a result of this policy, there was nothing to eat in the countryside, because everything they produced, the Soviet state took from them. Joseph Stalin sought to rapid industrialization of the country. His ambitious economic goals were contained in the five-year plans. Implementation of the planned economy had to lead people out of economic cultural and military backwardness. Stalin's intentions were mainly concentrated on heavy industry such as coal mining, construction of steel mills, iron and steel production. He expanded rail network and improved transportation. Stalin wanted to compete with other powers at any cost, and guard against their invasion. Implementing a policy of planned economy, he introduced very strict regulations regarding to discipline at work. The workers were forced into slave labor. There was a shortage of basic goods such as food, clothing, cleaning products. ...read more.

Stalin took their dignity away. They were exploited as cheap labor in the process of realizing tasks of the next three five-year plans initiated in 1929.'In the camps, the convicts met with sadism and senseless torture. Descriptions of these practices can be found in many diaries' Joseph Stalin, with his desire to transform USSR into a modern industrial power, murdered milion of its citizens. it turned out that Lenin was not mistaken as to the brutality of Stalin. This brutality manifested itself in many forms: persecution for criticizing the party, violence, repression, terror, confiscation of peasants' properties, slave labors, intimidation,suspecting everyone of disloyalty, restrictions on freedom, exposing people to hunger, diseases,creating inhuman working conditions, executions, propaganda. The life of the average man did not mean anything to Joseph Stalin. Stalin's regime was totalitarian. It was characterized by oppression, humiliation and a cult of personality. Stalin controlled all aspects of humans' life, introduced strict censorship and repression of political opponents. Until 1939, during the compulsory collectivisation of agriculture and industrialization of industry, citizens of USSR suffered too many casualties.Therefore, I believe that Stalin caused to people nothing but harm in this time because he was primarily a criminal. ...read more.