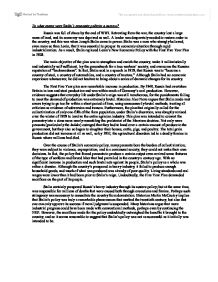 To what extent were Stalin's economic policies a success? Russia was full of chaos by the end of WWI. Retreating from the war, the country lost a large mass of land, and its economy was deprived as well. A leader was desperately needed to restore order in the country, and this was when Joseph Stalin came to power. Stalin was a man who strongly believed, even more so than Lenin, that it was essential to prosper its economic situation through rapid industrialization. As a result, Stalin replaced Lenin's New Economic Policy with the First Five Year Plan in 1928. The main objective of the plan was to strengthen and enrich the country, make it militaristically and industrially self-sufficient, lay the groundwork for a true workers' society, and overcome the Russian reputation of "backwardness". ...read more.

Furthermore, the plan that originally called for the collectivization of only one-fifth of the farm population, under Stalin's discretion, was abruptly revised over the winter of 1929 to involve the entire agrarian industry. This plan was intended to convert the peasantry into a class more nearly resembling the proletariat of the Marxism doctrine. Not only were peasants (particularly the kulaks) outraged that they had to hand over a certain amount of produce to the government, but they also so began to slaughter their horses, cattle, pigs, and poultry. The total grain production did not increase at all as well, so by 1932, the agricultural disorders led to a deadly famine in Russia where millions had died. ...read more.

Undoubtedly, the Five Year Plan demanded sacrifices on the part of its people. Stalin certainly prospered Russia's heavy industry through its austere policy; but at the same time, was responsible for millions of deaths that were caused both through executions and famine. Perhaps such stringency was necessary to resuscitate the country from devastation. Historian Martin McCauley implies that Stalin's policy was truly a remarkable phenomenon that marked the twentieth century, but also that one can only approve its success if moral judgment is suspended. Many historians argue that more industrial progress could have been made with conventional methods, perhaps even by continuing the NEP. However, the sacrifices made for the policy undoubtedly outweighed the benefits it brought to the country, and so it seems reasonable to suggest that Stalin's policy was not as successful as it initially was intended to be. ...read more.