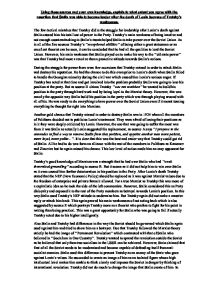 Using these sources and your own knowledge, explain to what extent you agree with the assertion that Stalin was able to become leader after the death of Lenin because of Trotsky's weaknesses. The few tactical mistakes that Trotsky did in the struggle for leadership after Lenin's death against Stalin caused him his total lost of power in the Party. Trotsky's main weakness of being inactive and not enough counterattacking to Stalin's taunts helped Stalin to take power over the Soviet Union. As in all of the five sources Trotsky's ''exceptional abilities'' of being either a great statesman or an excellent theorist can be seen, it can be concluded that he had all the qualities to lead the Soviet Union. However, his main weakness that Stalin played on to make his way to the ''ultimate power'' was that Trotsky had more a reactive then a proactive attitude towards Stalin's actions. During the struggle for power there were few occasions that Trotsky missed in order to attack Stalin and destroy his reputation. ...read more.

This low level of action made him an easy opponent for Stalin. Trotsky's good knowledge of Marxism was a strength that he had over Stalin who had ''weak theoretical grounding'' according to source B. But it seems as it did not help him to win over Stalin as it even caused him further deterioration in his position in the Party. After Lenin's death Trotsky stated that the NEP (New Economic Policy) should be replaced as it was against Marxist values due to the freedom of enterprise and private farms it allowed. For a true Marxist as Trotsky this was more of a capitalistic idea so he took the side of the left communists. However, Stalin considered this as Party disloyalty and exposed it to the rest of the Party members as betrayal towards Lenin's position. In this way Stalin used Trotsky's NEP attitude to undermine him. But Trotsky again did not make a massive reply or attack him back. ...read more.

Trotsky inefficient actions are also proven by source D which claims '' Often at the most critical moments of struggle he left the arena. Once when the Politburo was reviewing his position, he was on a hunting trip.'' Trotsky had a major weakness which was his inefficient actions against his opponent -Stalin. He had all the qualities of a good leader and politician but he just did not react strong enough against Stalin's tactics. His behaviour is almost not understandable as he had a few great chances to destroy Stalin particularly during the Georgian problem and with Lenin's testament. When he decided to oppose to Stalin by uniting with Kamenev and Zinoviev it was pointless as they themselves have already lost positions in the Party. Trotsky's incapability to counterattack Stalin's almost elementary tactics was the only reason that enabled Stalin to took power over the Soviet. Or the argument should not be about Trotsky's weaknesses that allowed Stalin to take power but about Stalin's too revolutionary behaviour as Trotsky was not the only one from Politburo that had a chance to take power over the Soviet and did not show enough resistance. ...read more.