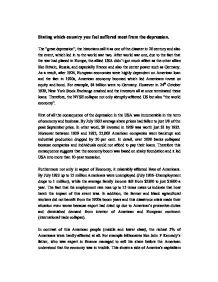 Stating which country you feel suffered most from the depression.

Stating which country you feel suffered most from the depression. The "great depression", the historians call it as one of the disaster in 20 century and also the event, which led in to the world war two. After world war one, due to the fact that the war had placed in Europe, the allied USA didn't got much affect as the other allies like Britain, Russia, and especially France and also the center power such as Germany. As a result, after 1924, European economies were highly dependent on American loan and the fact in 1920s, American economy boomed which led Americans invest on equity and bond. For example, $4 billion went to Germany. However in 24th October 1929, New York Stock Exchange crashed and the investors all at once terminated these loans. Therefore, the NYSE collapse not only abruptly affected US but also "the world economy". First of all the consequence of the depression in the USA was innumerable in the term of economy and business. By July 1932 average share prices had fallen to just 1/8 of the peak September price. ...read more.

For example billionaires like John F Kennedy's father, who was expert in finance managed to sell his share before the American understood that the economy was in trouble. This shows a side of America's capitalism and American will stand up. Secondly, unlike several countries in Europe, Japan was not lending any finance from US. So "gloomy Tuesday" did not hardly affect Japan comparing to US or Europe (Only 8% economic drop). However it resulted America to stop importing Japanese silk (Silk was a lucrative and huge industry in Japan) and reducing capacity or even closing down the heavy industries such as mining or steel. Inevitably this crisis also impacts to the political aspect. In Japan, the weaken government due to prime minister assassination attempt and with the result of depression urged the strengthened influential army officers to invade Manchuria in China to get over with this slump. Because it was time of nationalism and protectionism and made it very hard to purchase it and also consequence of decline of silk export, in Manchuria, it had remarkable amount of iron and coal resources. ...read more.

The depression had drastic effects on the local economy, which can partly explain the February 6, 1934 riots. Moreover, the conclict between the left and righ wing has accerlated. In conclusion, according to my reasearch, there wasn't a single country (related to WW1) got away with great depression. Therefore it was a global crisis. However, I believe that the country that has most suffered is Germany. As a result of treaty of Versaillies, they had to companstate millions of money to the league of nation, and the fact that they have lost the war resulted catastrophic situation in their homeland. Moreover, the industires and welfare for the German people were not stablised comparing to any other countey. I can argue that althought income of US people drop but I don't think the German's were evne getting to there and unlike US the German did not enjoy the economic boom and experienceed loosing a war. The fact they have thrown out the Weimar govervent and giving new power to the extremist Hilter indicates me that the German people and the government are who mostly suffered among the four countriies that Ihave mentioned. ...read more.