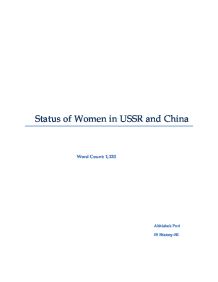 Status of Women in USSR and China Word Count: 1,120 Abhishek Puri IB History-HL In the Imperial Russia and China, women were oppressed. Under the Tsarist regimes women were viewed as inferior to men and were prone to being beaten and exploited by them. Similarly, Chinese women were traditionally looked down upon. In Confucianism, women are considered to be a burden. Women in imperial China were rarely encouraged and only executing household tasks were expected from them, being very similar to their Russian counterparts. Confucius believed that "a good woman is an illiterate one." However, in the new era of leadership of Vladimir Lenin and later Joseph Stalin, of the Communist Party of the Soviet Union from the years 1917 to 1953, an improvement of women's rights and status was seen in the USSR. As the Chairman of the Communist Party of China, Mao Zedong also reformed women's social standing in society at various stages of his political regime. Both Mao Zedong and Joseph Stalin believed that an increased role of women in society will augment the industrial and economic output and improve the social realms of their respective societies. ...read more.

However, due to being given the burden of carrying out duties in work places and at home, rest and recreation had become impracticable. As a consequence, the overall Russian lifestyle and family life had changed dramatically. By 1940, women had become fully involved in all spheres of life in USSR. The huge scale of industrial growth and development in USSR allowed women to climb the political and social ladder and become en par with men. The Soviet Union had become world leaders in women's education as the percentage of 7 women in higher education had increased from 28% in 1927 to 43% in 1950. The transformation of the Soviet economy from an agricultural or feudal based into a comprehensive industrial one and the emergence of the USSR as a superpower greatly helped the social cause for women. The life expectancy of women had jumped from 30 years in Imperial times to 74 under Gorbachev. Thus, women had become fully empowered in Soviet society under the rule of the Communist Party of the Soviet Union. ...read more.

Even though women were allowed to take up jobs in the government, they have rarely ever reached high ranked positions. Even after the rule of Mao and the economic reformer Deng Xiaoping, there were only five highly ranked women in the 198 member strong Central Committee as of 2003. It was only in 2005 that the communist party had agreed to improve the representation of women in Chinese politics. Thus, even though the status of women was elevated socially and economically, it was restrained politically. Women in USSR and China had been recognized as a big potential to contribute to the Communist regimes of both these states earlier on in their revolutionary phases. The implementation for equality of women and further development of education and healthcare system for them allowed them to take big leaps in the social arena by taking bigger responsibilities by handling households and their jobs; they contributed to the economic development of these countries as well. Even though the Communist Party of the Soviet Union encouraged the presence of women in politics and the Chinese Communist Party did not, they unanimously have a very supportive stand for women under Communist ideology, a big change from both the countries' Imperial ages. ...read more.