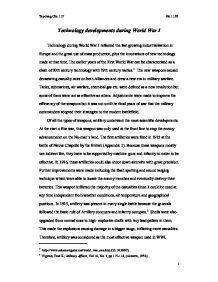 Technology developments during World War I Technology during World War I reflected the fast growing industrialization in Europe and the great use of mass production, plus the innovations of new technology made at that time. The earlier years of the First World War can be characterized as a clash of 20th century technology with 19th century tactics.1 The new weapons caused devastating casualty rates on both Alliances and drew a new era in military warfare. Tanks, submarines, air warfare, chemical gas etc. were defined as a new revolution but some of them were not as effective as others. Adjustments were made to improve the efficiency of the weapons but it was not until the final years of war that the military commanders adopted their strategies to the modern battlefield. Of all the types of weapons, artillery underwent the most scientific developments. At the start o fthe war, this weapon was only used at the front line to stop the enemy advancemenct on the No-man's land. The first artilleries were fired in 1915 at the battle of Neuve Chapelle by the British (Appendix 1). Because these weapons mostly use indirect fire, they have to be supported by machine guns and infantry in order to be effective. ...read more.

Another revolutionizing weapon used was the poison gas. From tear gas to leathal mustard gas, the chemical industries underwent a suprising develoment. At the beginning of the war, Germany had the most advanced chemical industry in the world.5 On 3 January, 1915, 18,000 artilleries containing tear gas were fired on Russians at the Eastern Front with no success. Due to the low air temperatures, the gas froze instead of vaporizing, completely failing the mission. Another attempt was taken under the command of General von Falkenhayn, launching the first chlorine gas attack in WWI at the battle of Ypres, 1915 against the British. Although it inflicted some casualties, it was not as successful as expected. The unexpected change of wind direction forced the Germans to retreat, unable to take advantage of a surprise attack created with this new weapon. Later on, mustard gas was developed but only served the purpose of disabling the soldiers physically and mentally. With the invention of gas masks by the British (Appendix 3), the effects of poison gas was reduced to its minimum and it only contributed to the suffering of the soldiers fought in this horrible war. ...read more.

This reduced the losses to a fairly small amount. But the Germans did not loose their confidence towards the U- Boats. An unrestricted Submarine warfare was introduced which allowed them to sink passenger ships as well. Eventually the Germans went too far with this strategy. In 1915 the Germans sinked the passenger ship Lusitania, killing 1200 people. Germany claimed that the ship transported vast amount of weapons but there is no proove for it (Appendix 5). This action provoked the Americans to join the Triple Entente against the Germans. The submarines were very effective in terms of the technological advancement, but the Germans failed to use this weapon to win WWI. Instead she created an even stronger enemy and destroyed her public image. 1 http://www.solarnavigator.net/world_war_one.htm (22.10.2007) 2 Vigman, Fred K.; Military Affairs, Vol.16, No. 3, pp 115-118, (Autumn, 1952) 3 Machine guns used during WWI. It was invented by the U.S. Army Colonel Isaac Newton Lewis in 1911. 4 http://www.learningcurve.gov.uk/greatwar/g3/cs1/background.htm (25.10.2007) 5 http://www.npr.org/templates/story/story.php?storyId=5390710 (25.10.2007) 6 The act of exploring (especially military) to gain information. Sometimes referred as scouting. 7 http://www.wapedia.mobi/en/Aviation_in_World_War_I.htm (27.10.2007) 8 "World War One in Color" Fremantle Media, 2003 (19.10.2007) Tay-Jeng Chu 11F 06.11.07 1 ...read more.