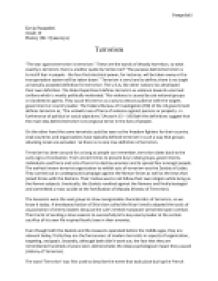 Terrorism is very hard to define; there is no single universally accepted definition for terrorism. The U.S.A, like other nations has developed their own definition.

﻿Pasupuleti Kevin Pasupuleti Grade 10 History (Mr. Nyamweya) Terrorism ?The war against terrorism is terrorism.? These are the words of Woody Harrelson, so what exactly is terrorism. Here is another quote by Vinton Cerf ?The purpose behind terrorism is to instill fear in people - the fear that electrical power, for instance, will be taken away or the transportation system will be taken down.? Terrorism is very hard to define; there is no single universally accepted definition for terrorism. The U.S.A, like other nations has developed their own definition. The State Department defines terrorism as violence towards unarmed civilians which is mostly politically motivated. This violence is caused by sub national groups or clandestine agents. They cause this terror as a way to attract audience with the targets government or country leader. The Federal Bureau of Investigation (FBI) of the US government defines terrorism as, ?the unlawful use of force of violence against persons or property?in furtherance of political or social objectives.?(Anzovin 15 ? 19) Both the definitions suggest that the main idea behind terrorism is to engrave terror in the lives of people. On the other hand the same terrorists could be seen as the freedom fighters for their country. Arab countries and organizations have typically defined terrorism in such a way that groups attacking Israel are excluded. So there is no one true definition of terrorism. ...read more.

The assault occurred as Jewish militia wanted to relieve the obstruction of Jerusalem during the civil war that caused the end of British rule in Palestine. Around 107 villagers were killed during and after the battle, including women and children, some were shot, while others died when hand grenades were thrown into their homes. Several villagers were taken prisoner and may have been killed. Four of the attackers died, with around 35 injured. The killings were condemned by the leadership of the Haganah the Jewish community's main paramilitary force and by the area's two chief rabbis. The Jewish Agency for Israel sent Jordan's King Abdullah a letter of apology, which he rejected (Henderson 20 ? 22). Another event that shook the world, especially the British was the King David Hotel bombing that took place in Jerusalem. The bombing of the King David Hotel occurred in July 1946 and some saw it as a critical moment in recent Middle East history. The King David Hotel was the site for the British Military Command in Palestine. It also served as the headquarters of the British Criminal Investigation Division. The bombing of the hotel electrified the British into realizing that their time in Palestine was coming to an end. On June 29th 1946, the British unexpectedly entered the premises of the Jewish Agency and took away with them a large number of documents. ...read more.

The September 11 attacks on the United States caused major disruption; the direct economic damage was relatively small in relation to the size of the economy. The direct costs resulting from the terrorist attacks were estimated by the Organization for Economic Cooperation and Development at $27.2 billion which represented about ¼ % of the U.S. annual GDP (Terrorism Research). Finally, over the longer term, there is a question of whether the attacks can have a negative impact on productivity by raising the costs of transactions through increased security measures, higher insurance premiums, and the increased costs of financial and other counterterrorism regulations. The biggest impact that terrorist attacks have on a country in my opinion is the Economy. In Conclusion, Terrorism is almost unstoppable. The quote “The war against terrorism is terrorism” in my opinion is true. The only way to stop a terrorist group is by using violence and violence is the main factor in Terrorism. Our world is a huge world with different cultures and different views, it is impossible to satisfy each and every one so there will always be people fighting against each other. As it is stated before one man’s terrorist is another man’s freedom fighter. Terrorist groups are quite small and well hidden, the attacks come at random times and it is very hard for the governments to defend against them. Terrorism is a very effective way to inflict pain and terror in the lives of people but at the same times it is very horrifying and tormenting. ...read more.