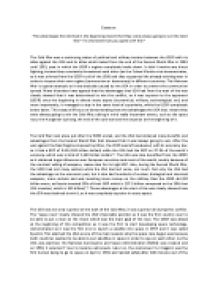 The advantages the USA had in the beginning meant that they were always going to win the Cold War To what extent do you agree with this?

﻿Essay on: ?The advantages the USA had in the beginning meant that they were always going to win the Cold War? To what extent do you agree with this? The Cold War was a continuing status of political and military tension between the USSR with its allies against the USA and its allies which lasted from the end of the Second World War in 1945 until 1991, year in which the USSR?s regime completely broke down. It didn?t involve any direct fighting; instead they constantly threatened each other (as the Cuban Missile crisis demonstrates, as it was a threat from the USSR to all of the USA) and they supported the already existing wars in order to impose their own regime (communism or democracy) in different countries. The Vietnam War is a great example as it was basically caused by the USA in order to prevent the communism spread. Many historians have agreed that the advantages that USA had from the start of the war clearly showed that it was determined to win the conflict, as it was superior to the opponent (USSR) ...read more.

Later on, the cosmonaut Yuri Gagarin was the first human being to go to space on April 2, 1961 and landed safely after 108 minutes out of the earth. This was a major Russian accomplishment, but they didn?t maintain their superiority. Then, the USA got ahead of them by launching the ?Apollo 11? into space on July 16, 1969, reaching the moon, and most importantly, the astronauts Armstrong and Aldrin being able to walk on the moon. Then, the space race was over, and North America had won. This confirmed the USA excellence in everything (scientific aspects, space discoveries, between others) and created fear in the USSR as now, America was ahead of them in every aspect possible and they were able to launch satellites, intercontinental missiles and/or nuclear weapons to the USSR. This made the USSR even more vulnerable against the USA superpower, and this competition was able to be won thanks to the USA?s advantages at the start of the war. The USSR was not only vulnerable compared to the USA in specific aspects such as science development, the space race, the military and kind of weapons advance. ...read more.

As the whole Soviet Union was in crisis, the leader at that time decided to let some western markets in, including the USA and it?s capitalism regime, which brought with it the Universal Declaration of Human Rights and for it to be practiced, therefore, there was now freedom of thought, of speech, between others in the USSR. Also, elections began being made, and soon, the countries were free from the communist regime, imposing capitalism instead. The USSR and it?s leaders didn?t do any significant movement against it as it was evident that the USA was going to win, especially because of the advantages it had at the beginning of the war and because it knew how to preserve this position. To conclude, the advantages the USA entered the war with helped win it and all of the other conflicts which took place at the same time, except the Vietnam War, and the great knowledge of this nation to keep the superior position made a great impact. Also, the USSR was weakened by all of its intern conflicts such as the Hungarian Uprising, which re-assured the victory of the United States of America. ...read more.