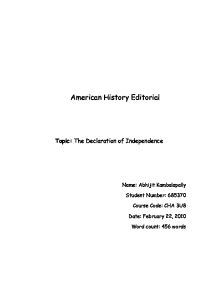 The American Declaration of Independence and the views of the Loyalists.

American History Editorial Topic: The Declaration of Independence Name: Abhijit Kambalapally Student Number: 685370 Course Code: CHA 3U8 Date: February 22, 2010 Word count: 456 words Abhijit Kambalapally The Apostasy of the "Patriots" The Second Continental Congress officially adopted the Declaration of Independence on July 4, 1776. The document announced that the thirteen colonies of America declare themselves as independent states and are no longer a part of their motherland, the British Empire1. The reasons mentioned for independence were that King George III established an absolute tyranny over the colonies and has violated his own principles by imposing direct taxes on the colonies. In the document, the powerful words such as, "abuses and usurpations", have been used to show that the King was responsible for every hardship experienced by the unfaithful colonists who call themselves "Patriots"2. ...read more.

According to the loyalists, the taxes which were levied on the colonists were fairly acceptable. The British Empire was in a huge debt and slipped into an economic crisis after fighting the French and the Native Indians. The French-Indian War was fought only to protect the colonists to ensure their safety, freedom and happiness. When the British asked the colonists financial help by imposing reasonable amount of taxes on the colonists compared to its other territories around the world, the loyalists took this as a chance to serve their motherland. They considered this taxation reasonable and were ready to save their motherland from the verge of bankruptcy. On the other hand, the so called "patriots" betrayed the British Empire by declaring their independence and saying that the King was a "tyrant" depriving them of the rights of "life, liberty and pursuit of happiness"3. ...read more.