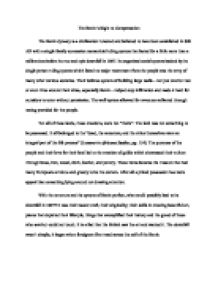 The Benin's Right to Compensation The Benin dynasty is a civilization rumored and believed to have been established in 800 AD with a single family succession monarchial ruling system that lasted for a little more than a millennium before its true and epic downfall in 1897. Its organized social system backed by its single person ruling system which faced no major resentment from the people was the envy of many other various societies. Their defense system of building large walls-not just one but two or even three around their cities, especially Benin-helped stop infiltration and made it hard for outsiders to enter without permission. The wall system allowed for revenues collected through taxing provided for the people. Yet all of these lands, these creations, were not "theirs". ...read more.

The downfall wasn't simple; it began when foreigners first tread across the soil of the Benin. The Benin began slave trading with the Europeans and the Portuguese, allowing the dynasty to become rich. A couple of centuries after, Benin fell into British hands, as a protectorate under the British Consul. This lasted for about 40 years after which the Punitive Expedition took place and the British infiltrated the Benin Empire and ravaged the dynasty without mercy, destroying a majority of their treasured art. The art that wasn't destroyed was taken by the British and many other Europeans, and is still, to this day, displayed around the world. Yet these displays don't have the Benin's permission. They want their art back. Forget compensation, they just want their culture, their ancestors hard work to be treasured in a way only they, the native people, original and rightful owners of the art, can do. ...read more.

Should the Benin be compensated? No. Why? It is because compensation is not enough. The artwork should be returned to the rightful owners. Money is not the issue here, nor is its value anywhere near enough to compensate for the stolen pieces. To world viewers the Benin art pieces may look worthless or could even be bought at a hefty price. Yet to the Benin, those art pieces are the embodiment of their lifestyle, their ancestors, their history, and ultimately, their culture. To them, those stolen art pieces are priceless. No amount of money could reimburse the grief of having everything they believed in being stolen from them. The British should return the art pieces, not with their heads held high, but with a modest bow, asking for forgiveness. This is an undisputable fact. ...read more.