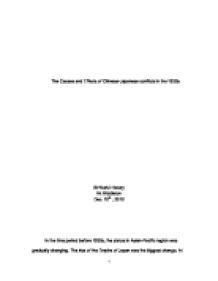 The Causes and Effects of Chinese-Japanese conflicts in the 1930s

The Causes and Effects of Chinese-Japanese conflicts in the 1930s IB World History Mr.Middleton Dec. 10th , 2010 In the time period before 1930s, the status in Asian-Pacific region was gradually changing. The rise of the Empire of Japan was the biggest change. At the height of its power, the Japanese Empire ruled over a land area spanning 7,400,000i square kilometers, making it one of the largest maritime empires in history. Meanwhile, China was really weakened by the ruler and the wrong policies. They could hardly protect themselves. Lots of problems kept China from modernizing as fast as Japan did. Therefore, as grow of a strong country, Japan was hungry for land and resources which they were lacked of. As a result of a long time desire and campaign, Japan had plenty reasons of declaring wars on China. It was clear that the main reasons were Japan's eager for land and then the invasions. So that the paper will focus on the causes and effects of the Chinese and Japanese conflicts in the 1930s. What were the causes and effects of Chinese/Japanese conflicts in the 1930s? It is a hard question to answer, because there were many small things happened that were unfamiliar with the western world since East Asia was politically different and kind of being isolated at the time; but on the other hand, it seemed connected with the rest of the world closely in some way. ...read more.

With Yamagata's instigation and encouragement, many ultra-nationalistic secret societies were built. The earliest start of Chinese decline would be the Opium War (1839-1842). As China was disastrously defeated by the British, the first treaty was signed. The Treat of Nanjing signed in 1842, it was the first of a series of agreements with the Western trading nations later called by the Chinese as the "unequal treaties". The treaty was followed by other incursions, wars, and treaties that granted new concessions and added new privileges for the foreigners. The actual ruler of China after the death of the Xianfeng Emperor in 1861 was Empress Dowager Cixi. Cixi was extremely conservative and refused reform of the political system. Efforts were made through the Self-Strengthening Movement of 1861-1895 to improve the China's military and economic position, but the country was racked by massive internal rebellions. Then Japan caught this chance to declare the First Sino-Japanese War. The influence of the war to China was the lost of the navy and the reducing to a semi-colonial and semi-feudal society. There was an important treaty signed by China and Japan called Treaty of Shimonoseki. In the treaty, China had to pay a debt of 200 million silver kuping taels to Japan, and give up the island of Taiwan. These massive reparations really aggravated Chinese people's burden and accelerated the develop of Japanese militarism. There were two other treaties followed by this one. One was The Boxer Protocol; the other was the Twenty-One Demand. ...read more.

And the war was really a victory on anti-fascism, more specific for Chinese people; it was a win on the imperialism. For Japan, the war was lost, but it gave them another chance to check themselves. As a country with limited resources, it was really hard for them to get into the far South of China, their supply was not enough, also the battle lines were cut by the Chinese, and the troops were surrounded by Chinese army at the end of war. Even though, China won at the end, the hatred was still rooted in Chinese people's hearts. The two countries today both are important powers to the world while the fact of wars and invasions are still remembered in people's heart. To conclude, Japan's invasion to China was much earlier than the other great powers at that time. Since the limited natural resources, Japan was desire on China's land and useful minerals. And the reason for them to declare the Second Sino-Japanese War were that they were in the time of rise, their ambitions were getting bigger and bigger; meanwhile, China was in chaos with other countries, and even within itself. It was overall a great chance for Japanese to invade China, and they were successful at the beginning. i Sheehan, Sean. World War II: the Pacific. Milwaukee, WI: World Almanac Library, 2005. Print. ii "Empire of Japan." Wikipedia, the Free Encyclopedia. Web. 10 Dec. 2010. <http://en.wikipedia.org/wiki/Empire_of_Japan#Military_and_social_organizations>. iii ""September 18th"" Xinhuanet. Web. <http://news.xinhuanet.com/ziliao/2003-09/09/content_1071557.htm>. iv "History of Nanking Massacre." 1937 Nanking Massacre :: Home. Web. 10 Dec. 2010. <http://www.nanking-massacre.com/>. ...read more.