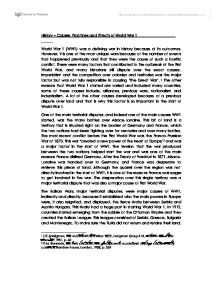 The Causes of World War 1

History - Causes, Practices and Effects of World War 1 World War 1 (WW1) was a defining war in history because of its outcomes. However, it is one of the most unique wars because of the number of events that happened previously and that they were the cause of such a horrific conflict. There were many factors that contributed to the outbreak of the First World War, and many historians still dispute over the exact causes. Imperialism and the competition over colonies and territories was the major factor but was not fully responsible in causing 'The Great War'. 1 The other reasons that World War 1 started are varied and included many countries, some of these causes include, alliances, previous wars, nationalism and industrialism. A lot of the other causes developed because of a previous dispute over land and that is why this factor is so important in the start of World War 1. One of the main territorial disputes, and indeed one of the main causes WW1 started, was the many battles over Alsace-Lorraine. This bit of land is a territory that is situated right on the border of Germany and France, which the two nations had been fighting over for centuries and over many battles. The most recent conflict before the First World War was the Franco-Prussian War of 1870. ...read more.

This feeling of worry and fear resulted in a rash decision by the Austrian Monarchy; they declared war on Serbia. The dispute over Albania caused so much trouble and was a key factor in the start of the war, as it caused a conflict between two empires, both of whom had alliances, causing the war to spiral out of control. The immediate cause and the event that 'pulled the trigger and started the declarations war'3, was the assassination of the Austro-Hungarian Archduke and heir to the throne, Franz Ferdinand. This was a result of the conflict between the two empires of Serbia and Austria-Hungary over land. This is an example of a quarrel over territory that then ended up being acted on in a violent manner. Archduke Franz Ferdinand was assassinated by a Serbian terrorist group, the Black Hand, whilst he was there due to the political situation at that time, 20 July 1914. This event 'set in train a series of diplomatic events that led inexorably to the outbreak of war in Europe at the end of July 1914'4. Although arguments of colonies and territorial disputes were a major factor in the declaration of war, one reason behind the start of WW1 that was not caused by a conflict over land was the system of Alliances that was in place at the time the First World War started. ...read more.

Due to the fact Germany only became a unified nation in 1871, they entered the race to expand very late compared to Britain who had colonies in many different continents, and France who control most of Africa. Germany were left with very little to sustain so they started lurking around for any scrap of land they could find. This would often lead to conflicts between Britain, France and Germany. The German empire soon got more and more frustrated and angry at the two controlling empires in Africa. This is one of the reasons, among others, that Britain decided not only to stay neutral when Belgium got invaded but militarily supported them against Germany. World War 1 was a conflict that had been brewing for a long time. From 1871, tension between empires in Europe started increasing as each one started wanting more control over the others. To show their power, the empires expanded all over the world. However, this would often lead to conflicts over land. Fighting over land within Europe was another issue as one nation was always scared of another gaining more power then themselves. Both of these examples of conflicts over colonies and territories were the main reason WW1 started. There were other contributing factors, such as, the alliance system, and together they are the reason the Great War started. ...read more.