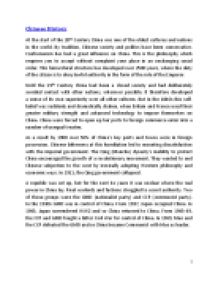 ﻿Chinese History At the start of the 20th Century China was one of the oldest cultures and nations in the world. By tradition, Chinese society and politics have been conservative. Confucianism has had a great influence on China. This is the philosophy which requires you to accept without complaint your place in an unchanging social order. This hierarchical structure has developed over 2500 years, where the duty of the citizen is to obey lawful authority in the form of the rule of the Emperor. Until the 19th Century China had been a closed society and had deliberately avoided contact with other nations, wherever possible. It therefore developed a sense of its own superiority over all other cultures. But in the 1840s this self-belief was suddenly and dramatically shaken, when Britain and France used their greater military strength and advanced technology to impose themselves on China. China were forced to open up her ports to foreign commerce enter into a number of unequal treaties. As a result by 1900 over 50% of China?s key ports and towns were in foreign possession. Chinese bitterness at this humiliation led to mounting dissatisfaction with the imperial government. The Qing (Manchu) dynasty?s inability to protect China encouraged the growth of a revolutionary movement. They wanted to end Chinese subjection to the west by ironically adopting Western philosophy and economic ways. In 1911, the Qing government collapsed. A republic was set up, but for the next 4o years it was unclear where the real power in China lay. Rival warlords and factions struggled to assert authority. Two of those groups were the GMD (nationalist party) and CCP (communist party). In the 1930s GMD was in control of China. From 1937, Japan occupied China. In 1945, Japan surrendered WW2 and so China returned to China. From 1945-49, the CCP and GMD fought a bitter Civil War for control of China. ...read more.

The Truman administration reacted to the spread of Communist power in China with acute discomfort. Washington had no desire to see a Communist government on the mainland, but it had little confidence in Kaishek?s ability to realise Roosevelt;s dream of a strong, united and prosperous China. In December 1946, Truman?s emissary, General George C Marshall sought and received permission from the White House to abandon his mission, arguing that neither side was cooperating in the effort. During the next 2 years the US gave limited military support to the Nanjing regime, but refused to commit US power to guarantee its survival Mao Zedong Mao was born in 1893 in Hunan province. His family was quite rich. He doted on his mother, but he fell out with his father when he refused to show him the respect expected of a Chinese son. In 1912, he trained as a teacher. In 1918, he joined the Hunan independence movement. In 1919, he worked as a librarian at Beijing University. It was here that he was introduced to Marxist ideas and developed a conviction that China needed a Revolution to be regenerated. During his student days in Hunan he witnesses the brutality of the rival warlords. ?The brutal punishments inflicted on the peasants included such things as gouging out eyes, ripping out tongues, disemboweling and decapitation, slashing with knives and grinding with sand, burning with kerosene and branding with red hot irons. What Mao saw greatly affected him, but it was not the cruelty which moved him so much as the realization that it was the strongest and most ruthless who always won. He concluded that the only way to gain power was through violence. ?A revolution is not a tea party, it is an act of violence, by which one class overthrows another? ??All power grows out of the barrel of a gun? In 1921, he became a founder member of the Chinese Communist Party, CCP. ...read more.

In March 1943, Mao achieved official leadership of the party, becoming chairman of the secretariat and of the Politburo Shoertkjndknfkdnfkjdsnfkjndkjnfkj The practice of organizing campaigns in the villages to ensure that policies were properly carrie Ig gave the CCP experience of government US policy was mainly to create a strong central government under US influence. The US hoped to bring the GMD and CCP together under the moderates of the Democratic League. This failed as both sides were too suspicious of each other. Talks broke down over the failure to merge the two armies. The USA reverted to supporting the nationalists. Serious fighting brokey was no longer interested in an armistice. Their advance continuored. out again between the armies of the GMD and CCP in Manchuria in April 1946. By mid 1947, the GMD army was overstretched in occupying all the areas gained and a successful Communists counter offensive began in Manchuria, sweeping the country. Chang Kaishek resigned from the Presidency in January 1949, and the GMD asked the US to mediate with the CCP, hoping to retain the South. The CCP sensing victor To what extent was the rise to power of Mao due personal appeal or ability? Showed ability & determination In quest for education Use of communism Gained on support from peasants in countryside Long March Alliance with nationalists Opposition to Japanese and nationalists Ruthless treaties State of China Mistakes of Nationalists Hostility to foreign control Mao was very successful not only in a sense that he achieved the target but he also exceeded it by far. He?s initial target for gross industrial output of 53,560 million yuan was exceeded by over 1000 million yuans in 1957.For particular areas of production, although in some areas like oil, machine tools and freight cars have not achieved the targets, majority of targets for exceeded in other areas. Therefore, it can be stated that Mao?s five year plan have turned out successful. The new Chinese flag. The large star stands for the Communists Party. What does each of the other four stars represent? ...read more.