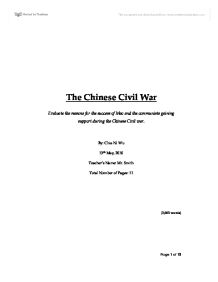 This not only led to its armies being poorly paid but also drove millions into abject poverty. By 1949, China's monetary system had collapsed, the government was discredited, and the people of Nationalist China were demoralized and troops began to lean onto the communists. There was a critic of Chiang and the Nationalists Party by General Joseph Stilwell, the American wartime liaison officer and he stated in 1943 when he was in a position to observe the situation in China at first hand. He stated: "I judge Kuomintang and Communist Party by what I saw: KMT: Corruption, neglect, chaos, economy, taxes, words and deeds. Hoarding, black market, trading with the enemy. Communist program... reduce taxes, rents, interest. Raise production and standard living. Participate in government. Practice what they preach." (Lynch 58) With this quote giving the purpose of informing the public what the general observe, we could also tell the values of this source. Being a primary source, this source gave us a view of what did the outsider observe during the time. In addition, as this was said by an American general who observed the situation in China at first hand, this source could be reliable and this shows the American's point of view of their stand. However, as this information was only given by a person, therefore we could not say that his saying has represented America as a whole. Furthermore, the quote may be bias in a sense that during that time the Americans sided with the CCP, therefore, in his saying, he stated only the negatives of the KMT and the positives of the CCP. ...read more.

The poor decisions made by KMT were also one of the crucial factors that led to the triumph of the CCP such as instead of resisting the Japanese, they spent their time going against the CCP. This turned everyone against the KMT. Lastly, with Mao and CCP's intelligence of gaining the support from the majority of the population; peasants, they were able to win the Chinese Civil War. To say that the stated factors were all the reasons that led to the communist's party would be rather farfetched. However, it is evident to say that these factors have played a part in the reasons for the CCP's triumph. Others factors that could be considered would be the world economic situations and other events that were happening at the same time worldwide which may have made an impact on the result of the Chinese Civil War. In conclusion, with all of these aspects and other factors that led to the triumph of the CCP, the Nationalists and Chang Kai Shriek was forced to flee to Taiwan. The Nationalists collapsed while the PLA (People's Liberation Army) marched victoriously into Beijing in January 1949. Mao Zedong then stood atop the main gate to the Qing imperial palace and formally declared the founding of the People's Republic of China. Even though, the CCP gained victory at last and under the leadership of Mao Zedong, the People's Republic of China was established, it did not specify on how did the nationalists react to the strategies that the communists used to gain support? such as with the use of the nationalist's weaknesses. This question remained unresolved, thus may make up another basis of another investigation. ...read more.