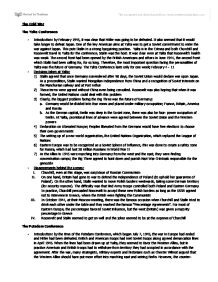 The Cold War The Yalta Conference - Introduction: by February 1945, it was clear that Hitler was going to be defeated. It also seemed that it would take longer to defeat Japan. One of the key American aims at Yalta was to get a Soviet commitment to enter the war against Japan. This puts Stalin in a strong bargaining position. Yalta is in the Crimea and both Churchill and Roosevelt travel to Yalta for the conference, Stalin was the host. It was clear even at Yalta that Roosevelt's health was weak. The second front had been opened by the British Americans and others in June 1944, the second front which Stalin had been calling for, for so long. Therefore, the most important question facing the personalities of Yalta was the future of Germany. The Yalta Conference lasts only for one week; February 4 - 11 - Decisions taken at Yalta; 1) Stalin agreed that once Germany surrendered after 90 days, the Soviet Union would declare war upon Japan. As a precondition, Stalin wanted Mongolian independence from China and a recognition of Soviet interests on the Manchurian railway and at Port Arthur 2) These terms were agreed without China even being consulted. Roosevelt was also hoping that when it was formed, the United Nations could deal with this problem 3) Clearly, the biggest problem facing the Big Three was the future of Germany; a. Germany would be divided into four zones and placed under military occupation; France, Britain, America and Russia b. As the German capital, Berlin was deep in the Soviet zone, there was also be four- power occupation of Berlin. At Yalta, provisional lines of advance were agreed between the Soviet Union and the Western powers 4) Declaration on Liberated Europe; Peoples liberated from the Germans would have free elections to choose their own governments 5) The setting up of a new world organization, the United Nations Organization, which replaced the League of Nations 6) ...read more.

Although a CFM eventually did meet, there were no extensive discussions on Germany * Conclusions; 1) The Berlin Crisis was a critically important event. It was a crucial test of will and power - it was a key stage in determining the future of Germany 2) The Berlin crisis immediately preceded two events of incalculable importance for the future of Western Germany a. The establishment of the Federal Republic of Germany b. The establishment of NATO - North Atlantic Treaty Organization The Establishment of the Federal Republic of Germany, 1949 1) All the preparations for this were made at the London Conference of February- March 1948 2) The Berlin Blockade was above all an attempt by Stalin to prevent the establishment of a separate Western German state 3) As early as May 1949, the British, French and American zones became the Federal Republic of Germany 4) The August Elections of 1949; a. There were two main political parties in Germany; the Christian Democrats (the more conservative party led by Konrad Adenauer) and Social Democrats (the socialists led by Kurt Schumacher) b. The British gave their support to the Social Democrats and assumed that they would win the elections. On the whole, the Americans favored the victory of the Christian Democrats because they wanted a more free economy c. On August 1949, the Christian Democrats formed a majority coalition government under Konrad Adenauer d. Theodor Heuss was the first President of the Federal Republic, established under a Basic Law by the military authorities, but Executive Authority lay with Adenauer, the Chancellor e. The years from 1949 were the years of the Wirtschaftswunde (the German Economic Miracle) with gains in productivity, GNP and prosperity of over 5% per annum, year after year. The Federal Republic and Western Berlin prospered greatly compared to the East - televisions, motorcars, supermarkets, night clubs, autobahns, foreign holidays, Mercedes, Porsche, Volkswagen ; this was normal for Western Germans but not Eastern Germans f. ...read more.

This whole movement was known as the Prague Spring - Two other Eastern European leaders put special pressure on Brezhnev to take action; Walter Ulbricht and Gomulka - they were concerned that the ideas would spread from Prague to their own countries - There were Soviet, Polish and East German troop exercises as a kind of warning to the Czechs. Brezhnev considered economic sanctions but thought that could drive the Czechs to the West - July - a conference between Soviet leaders and the Czechs; a) Dubcek agreed not to allow a Social Democratic Party b) In return, he said he would keep all the other reforms - August - a conference of the other Warsaw Pact countries called on Czechoslovakia to maintain political stability - August 20, 1968; Soviet tanks moved into Czechoslovakia and occupied Prague. Dubcek was dismissed from power and sent to work for the forestry ministry in Slovakia. In January, a young student, Jan Palach set himself on fire in protest of the ongoing events - Conclusions; 1) Britain, France and America as well as other powers condemned the Soviet action but this was little more than vocal criticism 2) An attempt was made to organize action from the United Nations but again this was not successful 3) This had very serious effects on the image of Soviet Communism in the West 4) It seemed that "Socialism with a human face" was not possible within the Soviet system 5) Dubcek had accepted that Czechoslovakia must remain in the Warsaw Pact and in COMECON 6) Albania now resigned from the Warsaw Pact, but this was so unimportant that Brezhnev did not care 7) The Brezhnev Doctrine was established after the Prague Spring The Brezhnev Doctrine - In the aftermath of the Czech crisis, Brezhnev tried to define the new policy a) Development in the direction of Capitalism could threaten the Socialist Commonwealth and then would become a problem of general concern for all Socialist countries b) The essentials of Communism were defined as: i. A one party state ii. To remain in the Warsaw Pact ...read more.