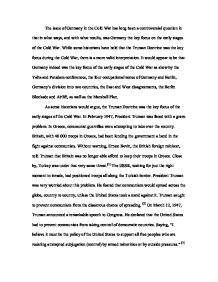 The issue of Germany in the Cold War has long been a controversial question in that in what ways, and with what results, was Germany the key focus on the early stages of the Cold War. While some historians have held that the Truman Doctrine was the key focus during the Cold War, there is a more valid interpretation. It would appear to be that Germany indeed was the key focus of the early stages of the Cold War as show by the Yalta and Potsdam conferences, the four occupational zones of Germany and Berlin, Germany's division into two countries, the East and West disagreements, the Berlin Blockade and Airlift, as well as the Marshall Plan. As some historians would argue, the Truman Doctrine was the key focus of the early stages of the Cold War. In February 1947, President Truman was faced with a grave problem. In Greece, communist guerrillas were attempting to take over the country. Britain, with 40 000 troops in Greece, had been lending the government a hand in the fight against communists. Without warning, Ernest Bevin, the British foreign minister, told Truman that Britain was no longer able afford to keep their troops in Greece. Close by, Turkey was under that very same threat.[1] The USSR, waiting for just the right moment to invade, had positioned troops all along the Turkish border. President Truman was very worried about this problem. He feared that communism would spread across the globe, country to country, unless the United States took a stand against it. ...read more.

Germany had experienced complete devastation by the end of the war. Houses, buildings, factories and even entire cities lay in utter ruin. Poverty was a common occurrence and food became very scarce at that time. [14]The United States and Britain desired to aid their zones in helping them recover. Stalin, however, sought after compensation for the damage done to the USSR during the war. Stalin attempted to ensure that Germany would never again be separated and transported it back to the USSR. The Soviet Union also established a communist government in the zone that they occupied. Britain, France and the United States, together, combined their zones of Germany and sectors of Berlin. [15]The outcome of this action was positive, as Germany in this combined area began to improve. People were now able to purchase food and store shelves were now stocked full of goods. The Soviet zone was not as fortunate though, dealing with difficult hardships in the lives of those who dwelt in this zone. Continuing on in the early stages of the Cold War, Germany was again the focus through the division of itself into two countries. The Western Allies realized that it was no longer possible to cooperate and work with the USSR over the running of Germany. [16]After several years of hesitating due to their fears of a reconstructed Germany, France took drastic action and merged their zone with the zones of Britain and the United States in September 1949, forming the Federal Republic of Germany. ...read more.

This decision was intended to increase the supply of West German coal and steel needed to rebuild the economy of Western Europe, but it was also intended to remind the Germans that they did not desire harsh external controls over German life styles to stay in place indefinitely. The day-to-day organization of West Germany was increasingly shared between the powers occupying Germany and Germans themselves. As well, West Germans were promised a state of their own. [32]In 1948 the three occupying powers -America, France and Britain - met together to draw up a constitution for a new West German state, which would come to life the next year. The lasting American policy of forming a democratic and economically fit West Germany to strengthen Western Europe's border with the Soviet sphere was close to completion. American hoped that such a state might even act as an attraction to Germans in the Soviet zone leading to the surfacing of a single Germany lying entirely outside the Soviet Union zone. [33] While some historians have held that the Truman Doctrine was the key focus during the Cold War. It is clear that that was not the case. Germany, in face, was the key focus on the early stages of the Cold War. Through this valid interpretation, and based on the facts analyzed it would appear to be that Germany indeed was the key focus of the early stages of the Cold War. This was shown by the Yalta and Potsdam conferences, the four occupational zones of Germany and Berlin, the division into two countries, the East and West disagreements, the Berlin Blockade and Airlift, as well as the Marshall Plan. ...read more.