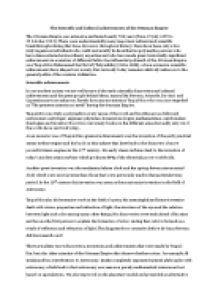 The cultural and scientific achievements of the Ottoman Empire

﻿The Scientific and Cultural achievements of the Ottoman Empire The Ottoman Empire was extensive and lasted nearly 700 years (from 27 July 1299 to 29 October 1923). There were understandably many important cultural and scientific breakthroughs during that time. However, throughout history, there have been only a few truly ingenious individuals who could universally be described as polymaths, persons who have demonstrated extraordinary expertise and who have made great, historically-significant achievements in a number of different fields. One influential polymath of the Ottoman Empire was Taqi al-Din Muhammad ibn Ma?ruf (Takyuiddin) (1526-1585), whose extensive scientific achievements have shaped our society. But curiously today remains relatively unknown to the general public of the western civilization. Scientific achievements In our modern society we are well aware of the early scientific discoveries and cultural achievements and the great people behind them, names like Newton, Aristotle, Da vinci and Copernicus are not unknown. Rarely does anyone mention Taqi al-Din who was once regarded as ?The greatest scientist on earth? during the Ottoman Empire. ...read more.

His discoveries were truly ahead of his time and he was the first person to explain the formation of color, stating that color is formed as a result of reflection and refraction of light. This happened two centuries before Sir Isaac Newton did his research on it! There are plenty more discoveries, inventions and achievements that were made by Taqi al Din, but also other scientist of the Ottoman Empire that deserve further notice, for example Ali Qushji and his contributions to Astronomy. Qushji completely separated natural philosophy with astronomy, which lead to that astronomy was seen as a purely mathematical science and not based on speculations. He also improved on the planetary model and presented an alternative planetary model for Mercury. Cultural achievements The Ottoman Empire was a time of true innovative thinking and culture flourished marvelously under this period in time. Some even mean that this particular time rival the artistic and literary achievements of the European renaissance. ...read more.

It was an exceedingly ritualized and divine art form and followed Islamic forms and rules, although it was written by Turkish intellectuals. The vast majority of Diwan poetry was lyric in nature: either gazels which deals with love, specifically a forbidden and unattainable love, or kasîdes which have a single presiding subject, rationally developed and concluded often used in theological and moral purposes. Art in form of carpets, calligraphy and ceramics were greatly developed in this period of time because of the enormous wealth of the Ottoman Empire, creating beautiful pieces of art describing the golden age of the ottoman society to present day people. The scientific and cultural achievements of the Ottoman Empire have truly influenced our society today in a great many ways, although we may not be as aware of it as you may think. Some of the greatest minds of this time are forgotten or barely mentioned in our modern western civilization. Trying to link the past with the present in this manner could lead to better understanding of our common heritage and respect for different cultures in the present day. ...read more.