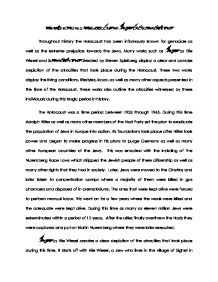 The Depictions of the Holocaust in Night and Schindlers List

The Depictions of the Holocaust in Night and Schindlers List Throughout history the Holocaust has been infamously known for genocide as well as the extreme prejudice towards the Jews. Many works such as Night by Elie Wiesel and Schindler's List Directed by Steven Spielberg display a clear and concise depiction of the atrocities that took place during the Holocaust. These two works display the living conditions, lifestyles, labor, as well as many other aspects presented in the time of the Holocaust. These works also outline the atrocities witnessed by these individuals during this tragic period in history. The Holocaust was a time period between 1933 through 1945. During this time Adolph Hitler as well as many other members of the Nazi Party set the plan to eradicate the population of Jews in Europe into action. Its foundations took place after Hitler took power and began to make progress in his plans to purge Germany as well as many other European countries of the Jews. This was enacted with the instating of The Nuremberg Race Laws which stripped the Jewish people of there citizenship as well as many other rights that they had in society. Later, Jews were moved to the Ghettos and later taken to concentration camps where a majority of them were killed in gas chambers and disposed of in crematoriums. ...read more.

On night the bombing of a nearby factory by an American plane woke everyone with a start. The German officers began to fear the nearby front slowly approaching and so they began to move the population of the camp to a new location. That night they gathered up the whole populous and began to run through the snow. Whoever stopped or slowed down was either shot by the officers or trampled by the mob. They ran until they finally ran 20 kilometers and rested in a nearby abandoned town where they spend the night. The next day they begin to walk again and reach a train station where they are loaded into cattle cars. While in the cars they travel for ten days during which they throw out the dead and hold on to their own lives. When they finally arrive at their new camp they unload the cars. The car that once held 100 inmates now held 12. During their time at this new camp Elie losses his father to dysentery and he loses his want to live. After this happening a few months later a rebellion was held in the camp forcing the SS guard to flee. The rebels now had charge of the camp and within a few days an allied tank had come to their aid. ...read more.

Many of the extreme conditions that the Jews were put under such as malnourishment, abuse and overall brutality was described in horrific detail throughout the duration of these works. There were a few historical inaccuracies in Night as well as Schindler's List .One of these inaccuracies include the absence of non Jews that were sent through the concentration camps and suffered the same fates as the Jews. Large populations of Gypsies, Homosexuals, communists and disabled also made up a significant portion of the inmate population. However, in neither Schindler's List was there mention of these condemned populations. With this historical inaccuracy also lead to another inconsistency with the historical facts. While at the concentration camps the different types of inmates were assigned a card to identify what type of class they fell into. These classes included communists which had a red card, Homosexuals who carried pink cards and Jews carried black cards. They were then filed into different blocks of the concentration camps according to their class. This depiction of organization was not seen in neither the book nor the movie and centered on Jewish inmates. In conclusion, many depictions of the Holocaust are seen in many modern works of our time. Schindler'sLlist as well as Night are clear and concise examples of such works that create a distinct interpretation of this time period in history as one of the most infamous mass murders in human history. ?? ?? ?? ?? Page 4 of 5 Page 2 of 5 ...read more.