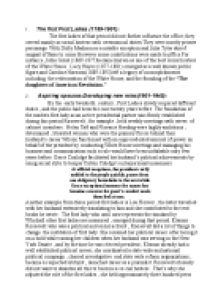 The developing roles of US First Ladies

﻿1. The first First Ladies (1789-1901): The first ladies of that period did not further influence the office, they served mainly as social hostess with ceremonical duties.They were mostly private personage. With Dolly Madison as a notable exception and Julia Tyler abrief singnal of fame to come.However some contributions were made to pffice.For instance ,Jullie Grant (1869-1877)became known as one of the best social hostess of the White House . Lucy Hayes (1877-1881) emerged as a well known public figure,and Caroline Harrison(1889-1893)left a legacy of accomplishments including the redecoration of the White House, and the founding of the ?The daughters of American Revolution.? 1. ...read more.

obligatory househoke to the next while Grace exceptional memory for names her Genuine concerns for guest?s comfort made them feel at ease. Another example from those period first ladies is Lou Hoover , the latter travelled with her husband extensively translating to him and she contributed to the text books he wrote . The first lady who until now represents the standard by Whichall other first ladies are measured , emerged during that period. Eleanor Roosevelt who was a political and social activist , Roosevelt did a lot of things to change the institution of first lady. She resumed her political career after lacing it on a hold while raising her children when her husband was serving in the New York Senate , and ...read more.

1. Model wives in the mass media era(1945-1979): With the advancement in television and mass media during this period , the first ladies became an intinate part of the public domain; they appeared on television, on the covers of popular women?s magazines?they emerged as a recognizable house hold names and faces , Lewist Gould called them ?Supportive ladies?. However these first ladies were not really influential or active as their predecessors , for example less Truman and Jackie Kennedy were private inviduals. Pat Nixon and to some extend birds Johnson, were often limited by very cobtoling husbands. Mamie Eisenhower had not the skills necessary for any policy. ...read more.